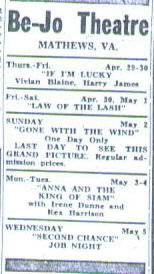 Originally opened in 1930 as the Westville Theatre. In 1936 it was renamed Be-Jo Theatre after the new owners daughters. The Be-Jo Theatre was closed in 1949.

It has since been remodeled into an office building.

Per a lecture on this theater by the Mathews Historical Society:

The original theater was the Westville located on Main Street in Mathews. It operated from 1930 to 1936.

It has since been remodeled into office building.