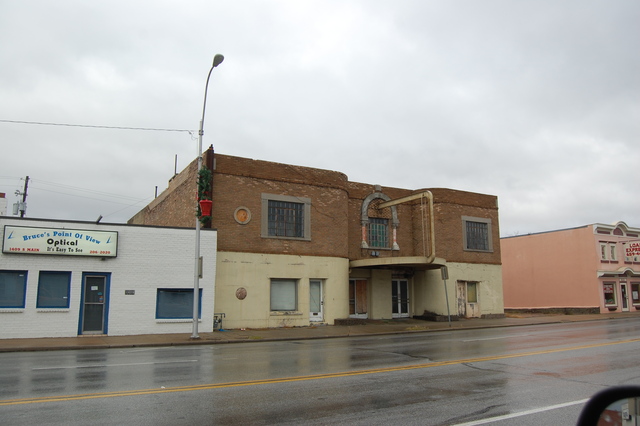 Jim Nutz designed and built the Show Theatre during the Depression, using innovative building techniques. The structure is Art Deco style with curved brick and steel reinforced concrete walls, utilizing many glass blocks. Several unique features included a mannequin on a revolving deck above the entrance, porthole windows, and a spacious backstage dressing room with a rear entrance.

The second floor boasted a luxurious lounge bathed in light coming through the large windows, balcony seating, and one of the earliest sound-proof cry rooms. The building had excellent acoustics, and a state of art projection room.

“Royal Wedding” with Fred Astaire was playing at the Glen in September 1951:

GLEN THEATER
Talented young Jane Powell follows through after her stellar
hit with Fred Astaire in “Royal Wedding” with a brilliant per-
formance in “Rich, Young and Pretty” playing at the Glen theater.
The scintillating cast includes such screen luminaries as Danielle
Darrieux, Wendell Corey, singer Vic Damone and Una Merkel.

The other Joplin theaters at the time were the Fox, Orpheum, Paramount, Tri-State Drive-In, Electric, Civic, Larsen, Rex,
66 Drive-In and Edgewood Drive-In.

The August 13, 1949, issue of Boxoffice Magazine announced that the Dickinson Circuit would take over the Show Theatre on September 1. It also said that the Show had originally opened in September, 1947. Dickinson intended to remodel the house and give it a new name. It was to be operated as a first-run theater. Seating capacity was given as 876.

Anyone have pics of this theatre when it was still operating?

Rereading my comment of Jan 4, 2009, I think the opening date of September, 1947, I cited from Boxoffice must have been a typo. The introduction says that The Show was operating during the depression, and the building in the photo A. Ratcliffe linked to is certainly of a style more characteristic of the 1930s than the late 1940s. Most likely the house opened in 1937, not 1947.

I’ve been unable to discover whether or not the building survived the tornado that struck Joplin last Sunday evening. One map of the tornado’s path shows its northern edge crossing Main Street near 13th Street, a short distance north of the Glen’s location. The former Wasson and Electric theater buildings are within a block of the Glen, so they would also have been in danger, as would the former Royal Theatre’s building, assuming it hadn’t already been demolished.

I just went by this theater today. It missed the path of the tornado by five blocks. Once you pass 20th street on Main there is complete and utter destruction.

Very true. I was there last week. Awful sad.

http://www.joplinindependent.com/display_article.php/moneta1311374988 Jim Nutz built this theater. Please see the following article about him, and a home he built at 417 E. 23rd that stands tall despite total devastation from the tornado all around it. He was quite the designer/contractor.

This opened as the Glen on November 17th, 1949 and as an adult cinema called Glen Art on February 3rd, 1967. Both grand opening ads have been uploaded in the photo section for this theatre.