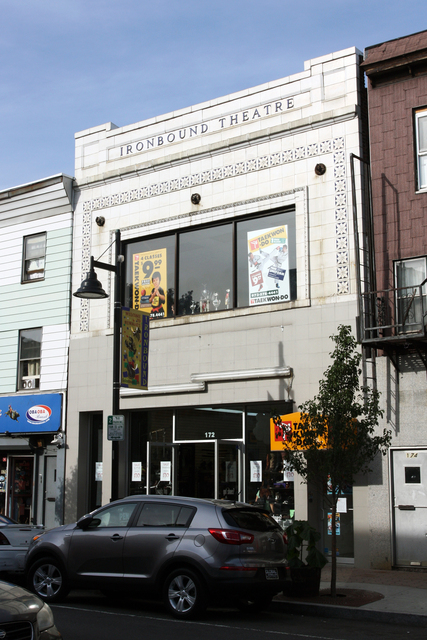 The Ironbound Theatre was opened around October 1921. It reopened as the Pic Theatre on October 16, 1946 and retained this name thru at least 1951. Later reverting back to the Ironbound Theatre name. It was still listed in the 1956 Film Daily Yearbook. After closing this former theatre housed retail shops on the street level and the International Tae Kwon Do Academy on the second floor. By 2018 it housed a garage for a bank and a bakery.

The Ironbound Theatre name is clearly visible on the white facade.

“There was the Ironbound Theater, where from 1930 on, only foreign films were shown.” excerpt from View link

Here is an undated photo:
http://tinyurl.com/5f9v8u

Nice photo Chuck amazing how you keep coming up with them.

Thanks KenMc and Chuck1231.I enjoy each theatre you guys put on CT.

Reopened as Pic on October 16th, 1946. Grand opening ad in the photo section.

The side wall Ironbound Theatre’s large former auditorium can be seen in street view from Jackson Street. It has been subdivided into a number of spaces, one of which is a garage for a bank and another the Maranatha Bakery.

In satellite view the structure appears to be about 80x100 feet, which indicates that it is probably the theater project of that size at Jackson and Ferry streets that was noted in the March 12, 1921, issue of The American Contractor. Newark Architect John B. Acocella was preparing the plans.

The ground floor retail shop (a shoe store in current Google street view) and the martial arts studio upstairs are still located in the Ironbound Theatre’s entrance building fronting on Ferry Street. The bakery, parking garage (and perhaps some other uses unidentified by any signage) occupy various parts of the former auditorium along Jackson Street.