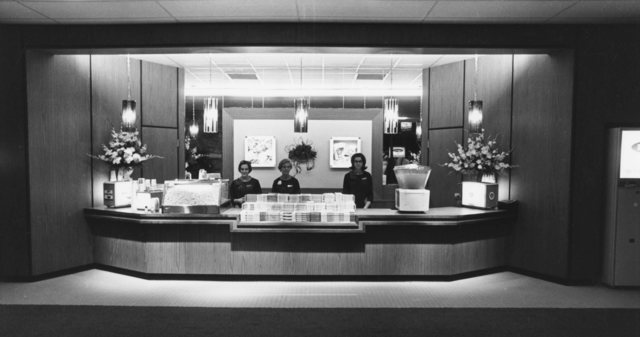 The Thruway Theatre was opened on February 16, 1969, under Wilby-Kincey Corporation. It was twinned in 1977 under ABC Theatres as the Thruway 1 & 2. Carmike Cinemas acquired the theatre in 1991, and operated it until it was closed in 1994.

I worked at this theater in my senior year of high school back in 1984-1985 (“Beverly Hills Cop” and “Thief of Hearts” were playing). Worked there as a projectionist in years following high school. Largest theater, must have had 600 plus seats.

Many great memories….scraping toast off the ceiling after “The Rocky Horror Picture Show” midnight runs, seeing “Billy Jack” as a kid there (my first ‘walk in’ theater experience), that VERY spooky basement that had a casket stashed amid the popcorn bags and cups, making out with concession stand girl’s sister in broom closet, hearing that our old box office guy, Mr. Poplin, ‘expired’ while in the box office booth, taking crap from a cantankerous manager with a runny eye (ewwww!), changing the marquee in snowstorms and rainstorms, and SOOOOO many other memories.

Since closing in 1994, it is now a Party City store. It was also situated next to a trendy bar and steakhouse so it was not unusual to see golddiggers dressed to the nines to attract Winston-Salem’s wealthiest at all hours of the evenings. One of the former projectionists painted the projection room to resemble the cover of Pink Floyd’s Dark Side Of The Moon!

There is a time capsule (or WAS a time capsule) outside of the theater from the year theater was built in 1969 that supposedly contains artifacts from that day it opened.

THE RETURN OF THE JEDI
THE 70MM-6 TRACK DOBLY STEREO EXCLUSIVE ENGAGEMENTS:

These were the only two cities within North Carolina that was given the 70MM exclusive engagement showings.

To SteadyRed805: Yes, the capsule is still there. It’s 50 years: the opening date is set for Feb. 14, 2019. I wasn’t at the dedication in ‘69, though I saw the plaque during many a Saturday Kiddie show there. I hope to make it down to Winston on that date myself.

I was the manager after Mr. Mumford

Opened on February 16,1969 as a single screener with a seating capacity of 600. Named the THRUWAY THEATRE or THE THRUWAY ULTRAVISION THEATRE

Second Auditorium opened in 1977 with a seating capacity of 350,and was renamed the Thruway 1 & 2 under ABC Theatres.

Carmike Cinemas closed this theatre in 1994.

“STAR TREK III:THE SEARCH FOR SPOCK” was the Thruway’s only 70mm-6 Track Dolby Stereo presentation in the Carolinas. The film played first-run in its largest auditorium seating 600 for its Triad Exclusive.

I have the original ads. Contact INDIANA JONES AND THE TEMPLE OF DOOM did not play first-run at Winston-Salem’s Thruway Twin Theatres.

Winston-Salem and Greensboro were absent from the 70mm-6 Track Dolby Stereo engagement presentations of “Temple of Doom”. Only Raleigh and Charlotte upon its opening on May 24,1984 were the only two cities in North Carolina that presented “Temple of Doom” in 70mm.

“TEMPLE OF DOOM” played first-run at Hanes Mall Cinema on 2 screens on May 24,1984. It did not play at the Thruway.

You might be the guy that wouldn’t let my Buddy and me in to see Porky’s because we were only fifteen. I had to wait for the beta.