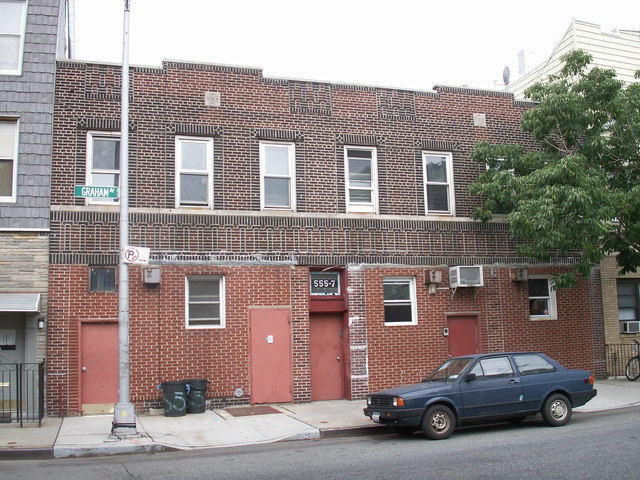 Located on Graham Avenue in the Greenpoint district of Brooklyn, this opened in 1914 as Sacks Theatre and seating was on one floor.

By 1915 it had been re-named Public Palace Theatre, a name it retained until it closed in 1927. By 1930 the building was in use for storage and in 1941, it was offices and also used for the manufacture of cakes, jam and fillings.

The building was converted into apartments. It was demolished in April 2015.

Thanks for coming up with this little gem. I am sure that just about no one in this area has any clue that this used to be a movie house. I know I didn’t, and I lived in Greenpoint from the 1950’s until 2001.

The one clue that I ever stumbled across that indicated, in any way, that this was not just another residence occurred in the early 1970’s. I was then politically involved and, in the course of seeking petition signatures for my candidate, knocked on the door at 555 Graham. The thing that struck me was that a large part of the first floor was then occupied by the headquarters/meeting hall of a local organization. (I have absolutely no memory of what it was.) The meeting room was quite large. This seemed unusual since the building was otherwise entirely residential. I didn’t give it any thought at the time – and the occupant refused to sign my petition. However, when I saw the photo that Ken Roe was kind enough to post two years ago, it all came back and I couldd now see the meeting room to be the last remaining remnant of the Public Palace.

I guess the Public Palace closed with the arrival of the talkies. It probably was just not worth it to make the capital investment that conversion to sound would have required.

Another possible reason for this theater’s demise just came to mind. During the early part of the last century, a fairly large Jewish population resided on upper Graham Avenue. A (now demolished) synagogue was situated just up the block at the corner of Engert Avenue and several (very good) Jewish butchers served this neighborhood into the 1960’s. Another remnant of this community is situated several blocks to the south, where the Our Lady of the Snows fraternal organization occupies a former synagogue. This community has long disappeared.

It is possible that the Public Palace once served a heavily Jewish clientele and closed, in part, as this community started to leave the area. This is only a guess, but I think a pretty educated one. Anyone else have any ideas?

It’s amazing how many of these old theaters looked like residential buildings with a marquee on it. Another one was the old Rogers theater on Broadway. (There is a page on the site)…there are photos linked of it, and it too looked like an old tenemant building with a marquee. It has been torn down however, and was on the corner of I believe Park Ave.

Some multi colored neon, some bright flourescents wrapped around a marquee or flashing on a blade sign, and instantly you have a drab, non-decript building facade transformed into a focus of attention. Theatres like this, the Rogers and the Lindy, et al, late run nabes, could not compare with the sumptuous movie palaces like the Folly, or the Republic, but shared in common the ability to transform the movie goer to the far reaches of the imagination through the magic of the movies.

A few months ago, a poster on the Meserole Theatre page noted that his father actually remembered the Public Palace. This represents, to date, the only first hand verification of the old theater that I have come across. It was very nice to discover this rare link to the past.

Based on an article in today’s Brownstoner, it appears that this site will soon be demolished and replaced with a four stroer “cracked mirrored” building. It actually looks quite interesting. And so it goes.

I subsequent post in Brownstoner confirmed that the old building has now been demolished in preparation for its all too modern replacement. Thus, the closed/demolished tag should now be applied to the old Public Palace. RIP.

Just google brownstoner and open its main brooklyn link. The article was posted earlier today. Sorry I cannot be more specific but I can’t negotiate the current way to link things in this page.