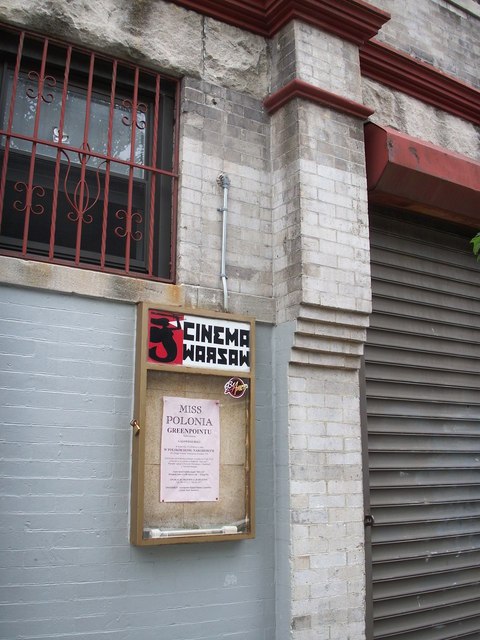 Opened in around 1914, this is a multi-purpose building which has a small auditorium, that was sometimes used for movies, but now hosts concerts, and other events.

I went by this site earlier today. The sign advertising “Cinema Warsaw” is still very much in evidence, and they are promoting a movie about the late Pope John Paul II. (I guess this is the Polish equivalent of advervising Disney films!)

While I agree this is not the sole – or even the main – purpose of this venue, cinema does appear to be a clear and ongoing activity here. Thus, it probably makes the best sense to err on the side of inclusion and keep this theater in the register. Sorry Warren.

The building on the corner is or was a bar, and if you go in and pass thru to the back, there is an enormous auditorium with a stage, and a balcony going all around. In the early 80’s, I did a production of “The Country Wife” there with a local theater group. I hope to go there very soon just to see if this performance space is still there. I know the theater group lost the use of the hall after that show.

Just passed by the place while riding on a bus yesterday. The “Cinema Warsaw” sign is still there and is advertising something called “Zabawa”, which, I guess, refers to something cinematic. (Despite my name, I hardly know any non-profane Polish words, and certainly not “Zabawa”. If anyone can make something of this word, please pitch in.)

In smaller print below “Zabawa” are references to food and drink services, which, as previously noted, strongly suggests that more than a movie showing is presented here.

So, while the place cannot reasonably be described as “Closed”, as noted at the top, what it is actually “Opened” for – and how much of a role cinema plays here – remains unclear.

Thanks for this lesson into Polish cinematic history, LM. Both your comments, my previous experience and a perusal of the web page strongly underline the strongly secondary role that cinema presentation plays at the Warsaw. Whether it is enough to merit its continued partcipation on this site is a very close question and one that I, at least for the time being, would answer on the side of inclusion. But I am certaily open to hearing opposing arguments.

A concert venue sounds very likely. Sounds like the auditorium where I did the play years ago is still there.

Just passed by the place yesterday. While the “Cinema Warsaw” box is still there, it was advertising what seemed to be a dance event. So, cinema does not apppear to be a heavy priority here.

Cinema Warsaw – the place is really called The Polish National Home and Warsaw @The Polish National Home because it is used for concerts mainly, live rock n roll music. it was once called cinema because they tried to show movies and stuff and thats why they called it cinema warsaw, it is now called warsaw because they of the live concerts, but the place is still polish national home.
they have a nice bar area, a kitchen area and a great ballroom with the balcony and a great stage.
here is a site
www.warsawconcerts.com
www.polishnationalhome.comin

Nope, no more movies. Now they have polish dancing nights on saturdays and live rock concert nights. the bar is open tue-sun.

Yhis confirms what I saw when I last passed by. While the annnouncement box still says “Cinema Warsaw”, it advertised a dance and referred to nothing cinematic.

For what it’s worth, the newly released Brooklyn Theatre Index has at least passively entered the debate about this theater’s status by NOT including it in its extensive records. This is odd, since the Index does not limit itself to movie houses and the Polish National Hall has long functioned as an active concert venue. Whether this omission represented an editorial decision or an oversight is for you to decide.

The Index DOES recognize the one-time existence of an old theater situated across the street at 255-7 Driggs – the Greenpoint Star – that operated from 1912 through 1922. I remembered the place as a furniture store and the temporary home of the Greenpoint Public Library.