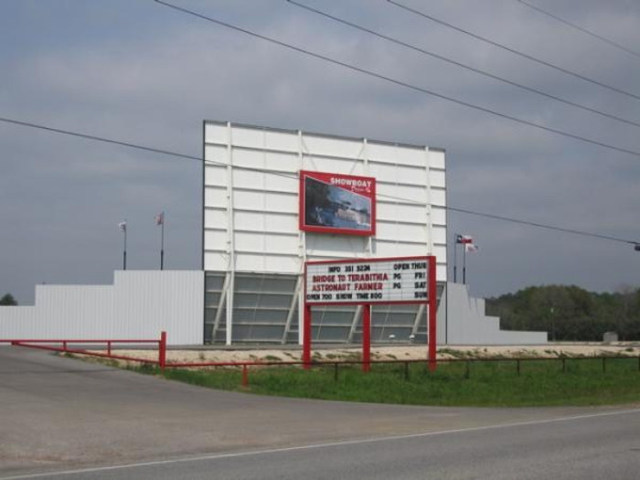 The grandchildren of the owner of the original Showboat Drive-In have built a brand new one at 22422 FM 2920, just outside of Tomball, near Houston. Talk, smoke, enjoy a beer, bring your pooch! Take your kids to the movies in their pajamas! What a treat! My kids think this is all a new invention; they went bananas! Screen is 40'x80'. Double features are shown.

It is now a twin screen theatre.

On opening night, they had to turn cars away. The place is great and doing a brisk business! Teens love it cause they can chat on their cell phones and text message without me screaming at them.

Excellent video on the grand opening of the Showboat

UPDATE: It’s 2012 and the Showboat is still going strong! My wife and I attempted to spend an evening at The Showboat but we were turned away due to a sell-out. This place has turned out to be a huge hit!

An article about the Showboat Drive-in: View link

We have been out twice this year – both times we experienced sell-outs at one or more of the screens – great prices – including food – watch Groupon for periodic coupons.

A History of the Showboat Drive-In: The Showboat Drive In opened March 31, 2006. Johnny and Chris Rumfolo own it. Our drive in was family built and operated. Along with his father, J.W. Rumfolo and sons Joseph and Michael, Johnny literally built the drive in from the ground up. We run the drive in ourselves with Joseph as projectionist, his wife Dinah overseeing concession and handling various aspects of paperwork, and our youngest son Michael in charge of ticket sales. Johnny’s grandfather, Walter Rumfolo owned The Showboat Drive In, a drive in restaurant in Houston, Texas during the 50’s. My parents, Lloyd and Wanda Olinger, worked at The Showboat Drive In in Bay City, Texas when they were teens. So I guess you could say our drive in was meant to be. We opened the drive in with one screen. In May of 2007 we added our second screen thanks to the great response to the drive in. We are still adding and improving as we work and learn more about the business. Each of our screens holds 400 cars and broadcasts the sound over FM frequency to your car radio. Drive Ins began closing down in the late 70’s and early 80’s for many reasons. Land values grew, drive ins popped up too close to each other and couldn’t thrive, property taxes, vcr’s, and movie rental businesses. So you might ask, “What has changed?” We think it’s time to get back to a simpler time and spend some time with your family. What could be more fun than sitting under the stars watching a movie with your family or your special someone. There’s not a lot you can do with your whole family that’s inexpensive and enjoyable. Our concession prices are reasonable and our ticket prices are a bargain for a double feature! We had a great time when we were young making memories at the drive in with our families and we hope everyone will come out to The Showboat Drive In and make some memories of their own! The Drive-In is fully digi8tal