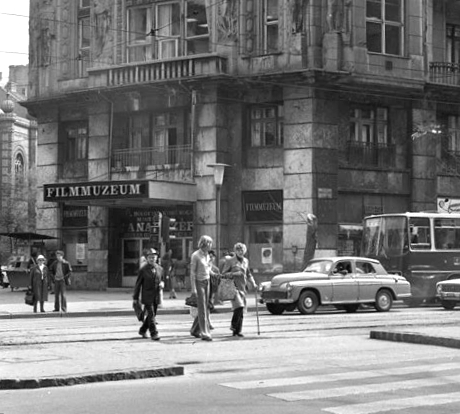 Located on the Pest side of the city, this originally opened in 1938 as the Barlang (Hohle) Kino. It later became the Ady Filmtheater and in 1957 was re-named Filmmuseum.

Now known as the Broadway Cinema, it offers French art house films as well as American movies in its large auditorium.

Cinephile who has lived in Budapest for 3 years — and I had no idea this place existed, a shameful fact that will soon be rectified.

Used to visit this one in the 1960s and 1970s when it was called “Filmmuzeum.” Yes indeed, they showed mostly French cinema, almost no Hungarian fare.

One of the few subterranean cinemas, yet once you got down to the auditorium, you certainly did not feel cramped. Very easy to get to, one short block north from the Astoria M2 metro stop.

I think this may have closed as a cinema and now operates as the Belvárosi Színház – a live theatre. I was not able to see inside :–(