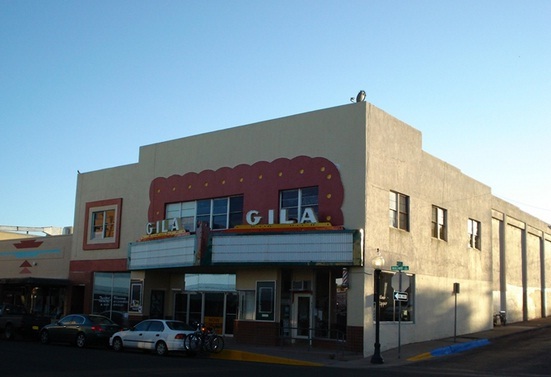 A fantastic example of a small town movie palace.

The 1950 Gila Theatre was the first movie house in the area to feature a built-in candy concession, it sports a combination of standard auditorium layout which rises around the entrances at the rear to a stadium-style arrangement. The original marquee is still intact, sans neon, and the auditorium features two-story high murals of stylized dancing Indians – murals being the unifying feature of Silver City movie houses.

The Gila Theatre was the last of the theatres in the locally owned Silco Theatres chain, a charter member of the Gibraltar Enterprises circuit based in Denver, which included the Lensic Theater in Santa Fe. The other Silco Theatres were the Silco, and El Sol, both downtown in Silver City, the Sky-Vue Drive-In, the Tejo in Hurley, and El Cobre in Santa Rita.

The Gila Theatre went through a succession of owners after the death of Silco Theatres founder Edward W. Ward in 1957, and was purchased by Dollison Theaters in 1978, and underwent a minor renovation.

The theatre was closed in 1988, and the building was donated to the town of Silver City, who considered renovating the building into a performing arts space, or demolishing it for downtown parking. After years of indecision, the Gila Theatre was sold by the town in 1995 to Richard and Donna Medina, who, with their family, partially restored the building and reopened it as a first-run movie house.

In the summer of 2003, the Gila Theatre closed once again.

Sale price is 639K. There are a few photos on the loopnet site:
http://tinyurl.com/2hog8z

A late 1970s photo of the Gila Theater in Silver City during happier times showing “The Sound of Music”.

Gibraltar Enterprises needs to be added as a past operator