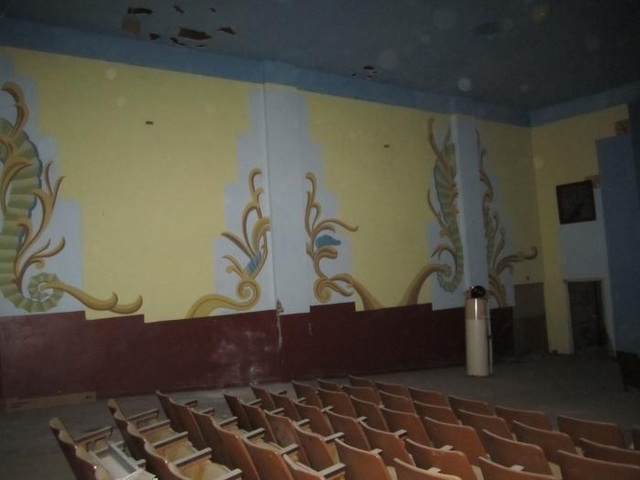 The El Sol Theatre was built as the second theatre in the Silco Theatres chain, owned by Edward W. Ward. It was constructed during the Depression (in 1934) by a local contractor without architects drawings using recycled, locally-made, soft bricks. Newspaper articles boasted at the theatre’s opening that the entire building, two-and-a-half stories with a balcony and a basement, had been built in ninety days – from the signing of the contract to the showing of the first movie.

The theatre was built as a dedicated movie house, which would show second-tier films which the schedule at the Silco Theatre down the street could not accommodate. The facade of the building was instantly a Silver City landmark, featuring a flamboyant architectural painting.

In 1940, Mr. Ward did an extensive renovation of his Silco Theatre property, which included professional auditorium murals, and was so taken by the effect that he asked theater employee Morris Rudick, an art student at the local college, to execute murals on the walls of the El Sol Theatre. These murals are abstract Art Deco in style, and emphasize the vertical columns which project slightly from the auditorium walls.

By the 1940’s, El Sol Theatre showed mainly afternoon Western serials and evening Spanish-language films, and the theatre was alternately opened and closed throughout the 1950’s, after the construction of the Gila Theatre in the same block.

When it finally closed, the auditorium was used as a warehouse for a neighboring sporting goods store, and the lobby was divided in two to provide storerooms and bathrooms for the two retail rental spaces in the front of the building. During this period, in the early-1990’s, the then-owner of the building executed an excellent exterior renovation, replacing the roof, patching stucco, restoring the original architctural painting, and constructing a portal over the sidewalk in the same style as the rest of the building.

The building was purchased in 1998 by Richard and Donna Medina, owners of the Gila Theatre. An extensive interior renovation was done, including replacing fallen portions of the ceiling, installing all new mechanical and projection plants, seats, and screen, construction of a concession stand in the lobby, and restoration of the auditorium murals.

The El Sol Theatre was closed in the fall of 2002, shortly after the Gila Theatre across the street. In 2012, the building is for sale.

Here is a B&W photo:
http://tinyurl.com/mram7v