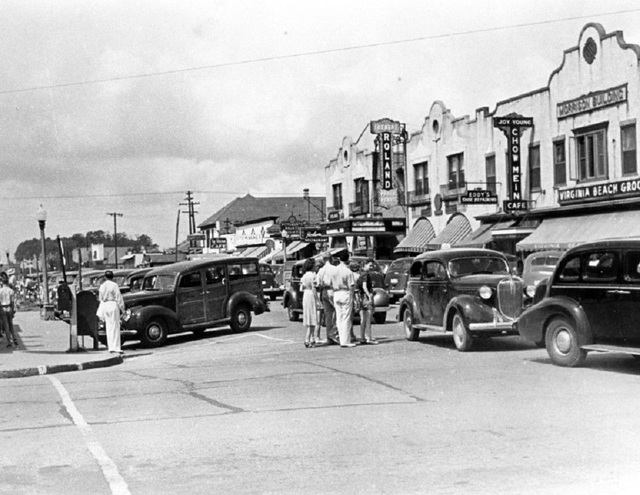 This theatre may have opened around 1930 and may have closed sometime after 1945. I think the original building still stands, but I’m in the Chicago area so I can’t check that out (someone in Tidewater, HELP).

I know there have been at least two different restaurants at that address. Bangkok Street Grill and Bubba’s Beach Club Restaurant. It could still be one of those restaurants or it could be something else.

Bubba’s, oh my goodness, don’t get me started. It’s not Bubba’s anymore though : (

Over the past several days southeastern Virginia print and television media have reported the demolition of the Roland Theatre as imminent. See, for example:

To appreciate this U-shaped building it is well worth using Google Maps to see a satellite image of its address, or www.bing.com to see an aerial view. The address to use is in both cases: “210 virginia beach boulevard virginia beach va”.

When did the Roland Theatre operate? Was the Roland Court built in 1926, as one source asserts? When the Roland Court opened that year as an adjunct to the Morrison Building, did it contain a theatre space? Was the building in use for several years before a theatre opened within it about 1930? Was the Roland successful? These questions are difficult or impossible to answer from easily obtainable documentation. The earliest newspaper ad that I have been able to find for the Roland Theatre appeared in the Virginia beach News for 4 January 1935 (p. 8). This was actually an ad for the (larger) Bayne Theatre around the corner on Atlantic Avenue. The Bayne had been running similar small ads, listing the features it was playing weekly, in the Virginian-Pilot since at least December 1933. On 4 January 1933 the Bayne’s ad additonally specifies the upcomng weekend (Friday-Sturday) program of “The Roland.” In the Bayne Theatre’s ad in the Sun for 25 January 1934, some detail of the (slightly modified) management poicy is provided. The Roland is there said to be “Open 2 Days Only Showing 1 Change of Pictures Per Week on Saturday and Sunday.” These ads suggest that the Bayne and the Roland wer under the same management, and that the Bayne was being operated as a kind of overflow facility in an arrangement that foreshadows later twinning. Further research would be valuable in throwing light upon what may have been the operational connections between these two neighboring theatres. Pending the discovery of additional evidence, it can be safely said that the Roland began operation no later than 1933 and continued to operate through at least 1946. The styling of the marquee shown in photographs of the mid-1940s suggests that it might have been installed around that date. The building it occupies, containing besides the theatre retail space subdivisible into as many as four shops or restaurants, and apartments above the retail space, is an interesting example of a mixed-used structure. Mixed-use buildings were favored in the 1920s to hedge investment in theatre facilities by diversifying their rent sources.

According to an Associated Press story, demolition of the Roland Court Theater began on Wednesday, 19 May 2010. See: http://www.wric.com/global/story.asp?s=12513478

Most references to this Mission style house, opened in 1926, call it the Roland Courts or Roland Court Theatre, but the vertical sign seen in this ca.1945 photo says only Roland. I thinkt he small sign under the vertical says “2 Big Films”, but it’s a bit blurry so I couldn’t swear to it.

Video of a 2010 WVEC news report about the demolition, which includes a couple of vintage photos, can currently still be seen at this link.

According to the newspaper, as well as my parents memory, the Roland was used by the Little Theatre of Virginia Beach sometime in the 1950’s or 1960’s. A cousin had an efficiency(one room) apartment on the second floor when her husband was performing at the ballrooms and nightclubs at Virginia Beach. His name was Jack Ryan or John Joseph Ryan, Jr. and he was with the Dorsey brothers.

In my memory the theater was closed and not noticeable. The entrance at the end of the court or alley had become a single windowless door.