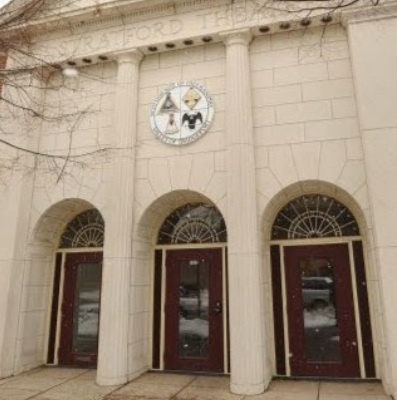 The Stratford Theatre was opened in 1921, one of the first theatres designed by West Haven based architect Harry S. Cannici. This theater looks like a town hall-style building, like the one with the clock tower in “Back to the Future”.

It’s on the south side of the railroad tracks and in a nice part of town, on Main Street, otherwise known as Route 113. There was a banner on the door for the AOH, so I presume they are leasing the building and “Stratford Theater” is on the top.

This was a fabulous little theater, and I grew up seeing movies there, before it was renovated into a really nice proscenium theater and used now for staged productions.

Stephen King also went to this theater and in fact opens his book, “On Writing” with an anectdote about the theater; apparently he got a lot of his inspiration from the horror films he saw!

My sister was a ticket taker there in the seventies and ironically, her twin worked across town at the long demolished Hi Way Cinema. My favorite memory of the Stratford Theater was trying to get to sit in one of the “boyfriend/girlfriend” seats. I’ve never seen any seats anywhere else like these; they were regular seats but twice the width. When the theater closed, I did manage to score a few of the regular seats and had them in my home for a while, but they are long gone, I’m afraid.

Stratford Center, where the theater is located, is a great little area; it’s only sad note is that they are subject to flooding during bad storms and I know there was a very destructive one shortly after the theater was renovated; hopefully, they are on the mend and not subject to high water marks ( I remember seeing the lines on the wallpaper when the theater flooded back when it was a movie theater…)

A great place and I’m so happy that it still continues as a theater and did not get destroyed.

I forgot to say that a few weeks ago I stopped by to check it out. It was about 9:30pm and a show was just letting out. The auditorium was quite small and looked less than 500 seats. The stage seemed to jut out too far and it felt cramped in there. No special decorations whatsoever.

I worked there beginning in April 1980, my first job, hired by the movie theater’s owner, a (then) ancient and diminutive man named Mr. Pickus. He was a great old guy who would come into the theater and sit over on the righthand side and doze off … always knew when he fell asleep because his upturned glasses would reflect the screen light! The candy counter was INSIDE the theater, but faced away from the screen. It was in terrible shape then. He only had one candy girl work most nights, but (pre-smart phone) we had a notebook that we would write notes to each other nightly (otherwise we’d die of boredom).

Continuing … Mr. Pickus closed the theater to retire, roughly in April 1981. The only films I remember playing there (I would open the candy counter door and watch the films surreptitiously) were The Black Stallion, The Long Riders, and Raging Bull. And I remember the boyfriend-girlfriend seats mentioned above.