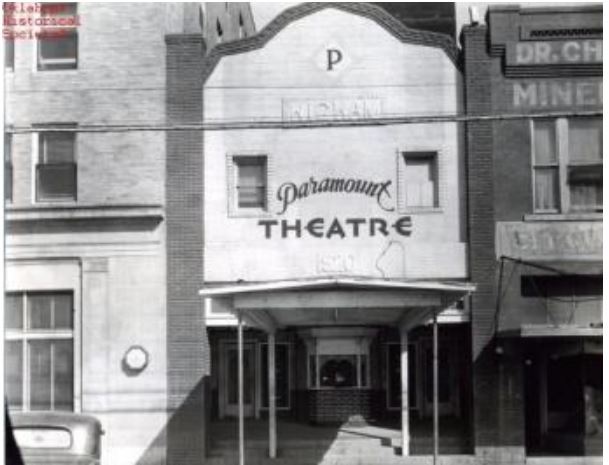 Opened on January 9, 1921 as the Wigwam Theatre, it later became the Paramount Theatre.

After the upstart The Movies 1 & 2 opened in 1969, Video Independent Theatres (a subsidiary of RKO) remodeled their long shuttered Paramount Theatre downtown, and reopened it under a new name, Dollhouse Cinema.

Superior film booking helped the Dollhouse Cinema to be stiff competition for The Movies 1 & 2. When the twin Movies closed, the Dollhouse’s purpose was fulfilled and followed soon after. It was demolished in early-2011.

Research reveals that the Plaza and Dollhouse were not in the same location. The old Paramount was remodeled into the Dollhouse Cinema around 1970.

The recently demolished Dollhouse Cinema sat on the rightside of the five story structure on W. Commerce off Hudson.
View link

Go to link below and type in “altus paramount”. Compare the two buildings on either side of the Paramount Theatre photo, then you will see that the vacant lot seen above is the exact location of the Dollhouse (AKA-Wigwam, Paramount) Cinema.
View link

Oh my God, I made a mistake four years ago … BFD!

All I know is what Joe Vogel wrote last month about the Delta Theatre. He says that the Delta burned down in 1954, and was never rebuilt.

Empty space pictured above was the STATE THEATER, North side of city square. It burned down. The PLAZA is on the West side, The DELTA was on the South side and the RITZ was on the East. The ALTUS DRIVE-IN was just East of the city. i grew up there and worked at the PLAZA and the STATE during the 50s.

No ads in the newspaper. Must had shown adult movies and the paper had an adult movie ban.

The original Wigwam Theatre was opened by H.K. Smith on the North side of the square on December 13, 1913. Due to ventilation issues, Smith launched the Wigwam Airdome on North Main Street for the warm summer months. On January 9, 1921 the “new” Wigwam launched likely in the same location.