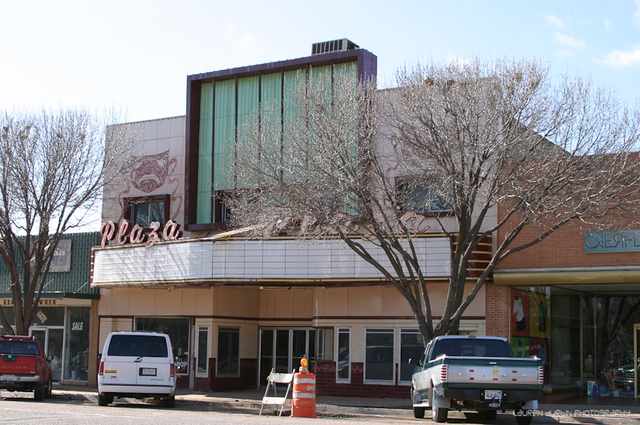 Circling the Altus Town Square were once four theatres, one on each side. Among these the Plaza Theatre is the only remaining theatre. It opened as the New Empire Theatre on November 4, 1925 with Charles Ray in “A Son and his Father”.

Originally designed in plain Spanish Colonial styling, it was later redecorated inside/out in dull Streamline Moderne style. It was closed in 1992.

Originally the Plaza Theatre had cast plaster decoration, but a streamline redo changed the place and gave it all the charm of a bus station. To see before/after pictures type in word “plaza”, then search …
View link

Date of note. “FRENZY” opens and instead of promoting a Hitchcock film the Plaza has plastered on the ad on Sept.3 1972. “AUTOMATIC PROJECTION EQUIPMENT”.Can’t make this up.I worked for a lot of theatres we never promoted the booth.

The Plaza Theatre has been converted into a church by the Altus Christian Fellowship. Their web site says that the building is used primarily as their worship center, but is still equipped as a functional theater and is available for a variety of events. An exhibit of theater memorabilia is on display in the lobby.

The Plaza Theatre was in operation as recently as 2005, when the June issue of Boxoffice cited a letter from operator Richard Day. The Plaza was then charging a top admission price of two dollars, which was also the top price at the concession stand, but the business was still struggling.

I haven’t found the Plaza mentioned in any later issues of Boxoffice, so I don’t know exactly how long it remained open after that, but an Altus Times article, apparently from 2007 (the paper doesn’t give dates for its archived articles, but only a generic “…years ago” heading) says that Janice and Richard Day had sold the building to the church group in August that year. The article notes that the Days had bought the Plaza in 2002 and had reopened it on May 7, 2004, after it had been dark for twelve years.

An earlier Times article, apparently from early 2004, gave some of the theater’s history. The house was built in 1928, and opened as the New Empire Theatre. Beginning in 1931, it was operated under a lease by W.T. Spears' Consolidated Theatres. By 1936, Spears was operating the house in partnership with Griffith Theatres (succeeded by Video Independent Theatres in 1949.) In 1948, Spears and the Griffith Realty Company purchased the theater building, and he and Video Independent operated the house in partnership until Spears died in 1968.

Video Independent retained its half interest in the building until selling it in 1991. The house was operated by Jimmie C. Wiley during parts of 1991 and 1992. It apparently closed that year, and in 1993 the property was deeded to the local redevelopment agency, which owned the building until the Days bought it in 2002.

I would imagine that the Moderne remodeling of the theater was done in 1948 or shortly after that, after the building had been purchased from its original owner by Spears and Griffith. I have no clue when the name was changed from New Empire to Plaza. The earliest mention of the Plaza I’ve found in Boxoffice is from 1954, but I haven’t found either an Empire or a New Empire Theatre in Altus mentioned at all.

Carmike Theatres took over the Video Independent circuit in 1983, according to the Gale Directory of Company Histories. The Altus Times article I cited says that the Spears Trust and Griffith Realty each retained a half interest in the Plaza Theatre building until 1991. Carmike must have operated the house under a lease.

The New Empire Theatre replaced a 15-year old Empire Theatre that had existed on the North Side of the city square.The New Empirelaunched November 4, 1925 with Charles Ray in “A Son of His Father” supported by a comedy short, “The Tourist” with Johnny Arthur.