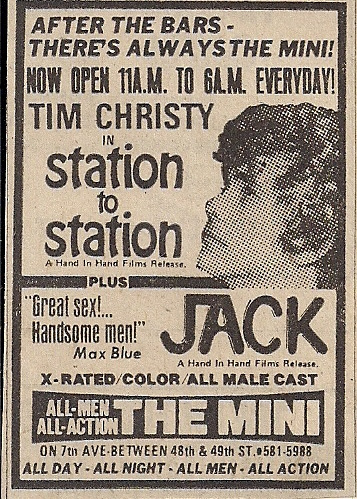 Later renamed Frisco Theatre, its biggest claim to fame would undoubtedly be the double bill of the seminal (pun not intended) porn-chic flicks “Deep Throat” and “The Devil in Miss Jones”, which continuously ran here for about a decade. This pairing, which began around 1973 and lasted at least until 1982, made the Frisco Theatre something of a tourist destination – though I doubt it ever made the AIA Guide to New York City.

That’s what I thought.

The building is still standing. The new 1600 Broadway residential tower sits on the footprint of the demolished Studebaker Building that was on the 48th Street end of the block. The rest of the block consists of 4 other buildings, which includes 734 Seventh Ave, 740 Seventh Ave (on the corner of 49th), 202 West 49th (where the World Theater moved after the original World became the Embassy 49th) and the 3-story L-shaped building that fronts the corner of Broadway and 49th as #1604-1610 (where the Circus Cinema and Big Top Theatre was) and also fronts Seventh Ave at 732 (where the Frisco/New Mini Cinema was located). All of these buildings are still standing – and all are owned by the related companies Farmore Realty Co Inc or Sweetheart Theatres Inc, the latter of which ran numerous porn theatres in the area – see my post above dated Oct 1, 2006.

732 Seventh Avenue is currently occupied by two asian kitchens – Pearl’s and Teriyaki Boy. As per this photo from Feb 2011, Teriyaki Boy closed due to high rents. But this is definitely the same location and building that housed the Frisco. The new 1600 Broadway is immediately adjacent to the left.

Bottom line here, an AKA should be added for New Mini Cinema, which is the name under which this cinema originally opened. Also the address should be confirmed as 732 Seventh Avenue. And status should remain as closed, since the building has not been demolished. Took us 5 years and it seems only Al, Ken and myself give a damn, but there you have it!

I think we can also eliminate the 3rd paragraph in the intro and incorporate the line about it’s opening in 1969 as New Mini Cinema into the first paragraph. Also can update number of seats to 130 and current function as retail/restaurant.

If you scroll down this story about Bill Clinton waxing melancholy about the hookers of Times Square you will find a photo of the entrance to a Samson theatre in Times Square.

And there’s a photo of the Pussycat on Seventh and 49th that also shows that Fascination arcade sign I mentioned above. No idea where the Samson is or what it was. If only we could make out some of the other storefront signs or address numbers as a reference point.

Sorry didn’t mention the Fascination sign here, it was earlier today on the page for the Cine Lido.

From grindhousedatabase.com comes, at long last, this photo of the Mini Cinema from around 1969 or 70. “Love Camp 7” was a definite 1969 release, not sure if either of the films called “The Animal” at imdb.com are the same as the title featured on the Mini’s flat marquee.

In September of 1970, Variety identified the Mini Cinema as the first venue in NYC to screen films (16mm) with explicit hardcore content (outside of the context of the 35mm “marriage manual” films were screening widely that same year). Maybe they should erect a plaque.

Al Goldstein wrote a review in Screw Magazine on the Frisco Theater in 1977 and highlighted myself in the review as I worked there. Upstairs on the right there were “Peeps”.The windows were opened at that time. It was up a large set of stairs from the street. To the left upstairs there was a small theater. The Frisco which we called Black Jacks was the very first theater in NYC to host live S&M Shows. A year later Belle Du Jour began presenting S&M shows a few blocks south of 42nd St. Then Show World on 8th Ave. caught on, The Star Ship Discovery night club on 42nd St and many other venues. It all began at the Frisco Theater.

BD, please do tell us more. This is lost history due to morality barriers.