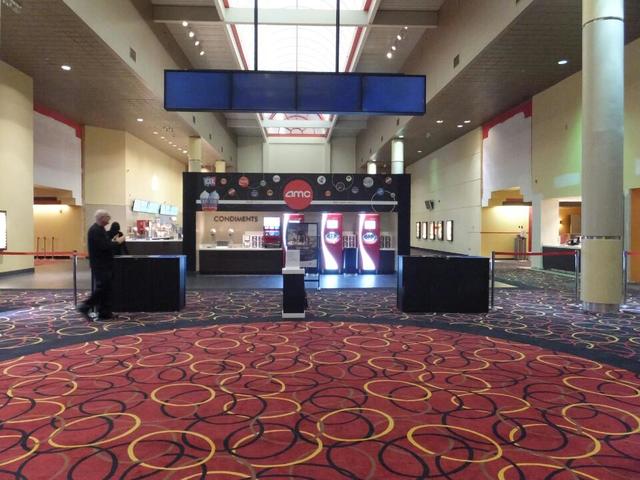 the new imax screen will open on thursday night with Edge of Tomorrow according to AMC’s facebook page.

Does anyone know which auditorium was converted to Imax? My guess is #14 as that’s the largest, though it’s difficult to imagine how any room there could be converted. None are particularly large, the exit doors in #14 to the left and right of the screen would be in the way, and all rooms have ceilings seemingly too low for Imax as the theatre was originally built without stadium seating.

For this theatre I’m not sure how they could reasonably convert any of the auditoriums without quite an overhaul!

Dolby cinema is coming soon to this theater.

Attended a showing of ‘Dunkirk’ in the IMAX house yesterday (it is #14). Screen seemed to be expanded vertically to extend to floor and ceiling but width was constrained by exit doors. This was my first visit to this newer crop of smaller IMAX theaters with laser projection. I was somewhat concerned as the pre-show presentation quality was pretty awful but that must have been from a separate projection system. Sound was good, bordering on a bit much through the previews. Would like to get the chance to see ‘Dunkirk’ in the full 15-perf IMAX format to compare.

Dolby Cinema appears to be up and running, but couldn’t get a look as it was located down the other hallway.

Yep, That Is Why.