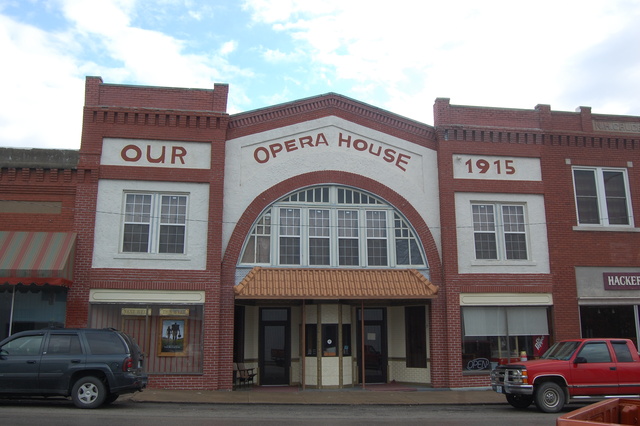 The Opera House, which was opened in 1915, was a 50 x 75 foot structure with a seating capacity of 700 people. The main floor was 50 x 50 feet and contained a balcony 20 x 50 feet, two smaller balconies graced either side of the main floor area near the stage. The entrance had a lobby with a colored tile floor and large plate glass windows. The theatre was built of brick and steel and heated by steam.

The first floor contained 350 plush opera seats and the balconies were furnished with seats bought from the Star Theatre in Nevada, Missouri. This is from an article that ran in the Sun newspaper in 1981.

The front of the theatre is two story and very ornate. The building is made of red brick with stucco accents. The original interior has been removed with the exception of the rear balcony and the tin ceiling. The ceiling is in good shape and we believe that we will be able to keep it.

Per the 1981 article, the Opera House began to show movies in 1919 and also was used for performances of high school plays. It was renamed Park Theatre from 1936 until the late-1950’s. The theatre was closed in 1971.

After a period when restoration and renovation to the building was carried out, it was reopened in 2010.

For restoration pictures go to www.theoperahousetheater.com and we show step by step what we are doing, thanks, TroY Allison

This is from Boxoffice magazine in July 1957. Park Theater should be an aka.

EL DORADO SPRINGS, MO.-Mrs. Walter Lovan, operator of the El Dorado Drive-In, has purchased the Park Theater equipment from Ray and Dorothy Brown. In addition, the building at 105 N. Main St., now occupied by the theater, has been leased from Mrs. Fern Williams and son Edward.

In 1936 Mrs. Lovan and her husband, the late Walter Lovan, became managers of the Park and operated it successfully for a number of years. In 1954 the El Dorado Drive-In was built on Highway 54. Plans are being made to redecorate the Park Theater in the near future. The house is to be closed temporarily and an announcement made concerning the reopening date.

The Opera House Theatre has reopened,and if you go to the website noted above, you can see their schedule.

http://theoperahousetheater.com/ domain is for sale.

It appears that the Opera House is now using a Facebook page as its only web site.

No, wait. The Facebook page has a link to this web site, but it has only a request for donations and volunteers, and a notice of a board meeting and an open house, both held last month. Whether this will eventually become an official web site or not I don’t know.