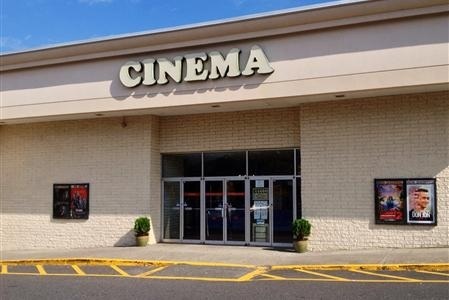 Basic shopping center theater. Was visiting here over the summer and the projector broke down twice. Heard the locals say that this happens all of the time at this theater. I couldn’t recall ever having this happen to me let alone twice during the same movie. Overall an okay experience.

Yeah, it’s an oldie-chopped in half than chopped again- once part of a theater chain called “Cinecom” in the late sixties/early seventies. They also ran the Chester Quickway and the Squire in New Windsor. They used to show alot of foreign and independent films in the late seventies/early eighties-guess to attract the college crowd. Used to drive up from Middletown-they’d get alot of Woody Allen films and indies like “Smoke”, “Damage” and “Erotique” In the early eighties they played “Repo Man”, “Metropolis” and alot of other cool stuff.

I went to many movies I was in college at SUNY NEW PALTZ. IT was a twin for a year.Movies were watchable with decent size screens.

Then they had the bright idea to make it a QUAD!

Now it has to be ONE OF THE WORST MOVIE THEATRES! The front two theatres have only 5 rows of seats with THE SMALLEST SCREENS I HAVE EVER SEEN! The sound is also sub-par.

The back screens are a tad bigger but still much smaller then they used to be.

I do not see how they stay in business !

Do yourself a favor and travel down to Rosendale just 20 minutes from New Paltz and see a film in the Rosendale Theatre a TRUE GEM!

Please update, 347 seats (all screens has selected rows with recliners for an extra fee)