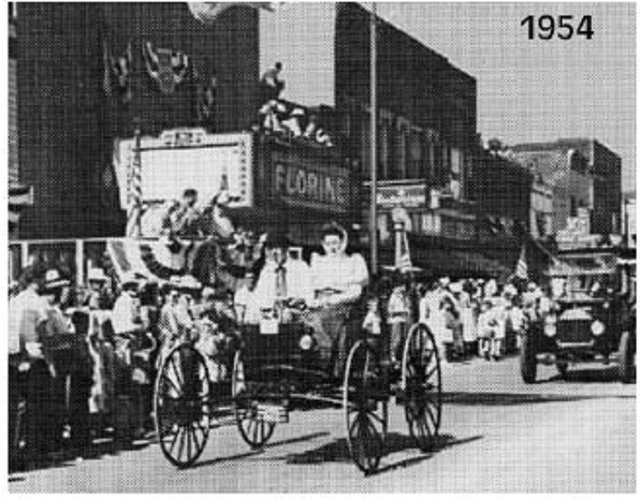 The history of the Florine Theatre and other houses in Flora is recounted in a comment by Konrad Schiecke on this page (which also has a couple of photos) of the Cinematour Forum.

The Florine Theatre was on the site of the Opera House, opened in 1911. In 1921 the Opera House became the Orpheum, and the name was changed to Florine Theatre in 1935. The house burned in 1936 and was rebuilt on a larger scale. It was in operation until 1957, and in the late 1970s the building was destroyed by another fire. It had to have been on the vacant lot next door to Etchison’s Appliance shop, which is at 128 W. North Avenue.

The May 5, 1921, issue of The Flora Journal-Record had a front page story about the plans of the new owners of the Opera House which can be read here at the Illinois Digital Archives.

On August 18, the paper published this shorter article about the progress of the project:

“Work on the new Orpheum Theatre is rapidly nearing completion and the management hopes to have the grand opening about September 1st. The building when completed will rank with any of the largest theatres in architecture features and will have everything that is needed to put it in Class A.

“Two features of the new theatre —the ladies' rest room and steam heat, will be appreciated. The stage will have new and beautiful scenery and also the latest lighting effects and stage equipment to accommodate any vaudeville or road show. The projection booth will have the latest and best equipment, with two new machines, which will show a complete picture without a stop. Watch the Journal-Record for the opening date.”

Joe is right about the probable location. The May 1912 map shows a wooden theater building on this site. On the March 1906 map, there are some small wooden stores. The theater building runs the whole depth of the block, and has a deep stage at the rear. The entire building was tin clad, with an ornate front featuring a double-arched entry. The front wall of the lobby was concrete block (doubtless the stuff patterned to look like stone), and the ticket booth was in a bowed-out central portion. From the article above, it appears this building was replaced in 1921.

There is however, a problem with the Opera House ID. The 1906 map shows the opera house across the street, at 117. This building still exists, with an ugly windowless flat front from sometime post-WWII. That building appears at least as early as 1894. By 1912, it appears to have closed, and only the ground floor stores are noted. The structure appearing on the 1912 map is much less substantial. It is noted on the map only as ‘Moving Picture Show’, although the stage is noted as having scenery.

I could only find Cahn guides online for 1897 and 1905, and neither mention Flora at all.

The Cinematour thread linked to by Joe is confusing. Konrad had the wrong address for the Casino (it was likely at 103 W North), and one of the earlier posters suggests the Orpheum and Florine were both in operation in 1946, along with a Roxy, which Konrad claims was built on the site of the Casino. The building at 103 W North was never demolished, although the location of 103 E North became a parking lot as far back as 2009 (and probably well before that).