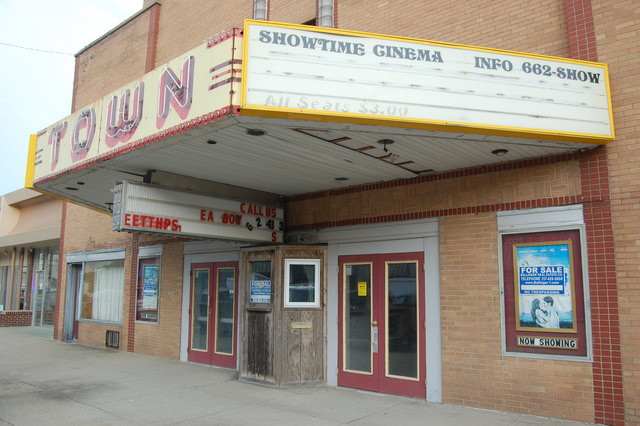 The Town Theatre opened on March 27, 1951 with 500 seats. This simple yet stylish Art Moderne style movie house has a triangular marquee with the theatre’s name spelled out in large, chunky lettering.

The Town Theatre reopened around 2002 by Showtime Cinemas, after being closed for a short time. It was twinned around 2006, and showed first-run movies from Friday-Monday.

It was closed in spring of 2012 and the building is ‘For Sale’. It was reopened November 21, 2014 screening revival/classic movies. In 2021 it was donated to a non profit named Nostalgia and was renamed Nostalgia Theatre. Renovations began early in 2022 and the theatre will be used for music, dance, art shows, comedy & theatre productions.

This one is closed and for sale.

The Town Theatre apparently reopened last night. I opened their Facebook page and the top entry, posted 21 hours ago, said “Don’t miss out on opening night.” They ran a double feature of American Graffiti and Dirty Dancing, so it probably isn’t going to be a first-run house. I don’t see any other movies scheduled, either, so they might be open only part time for now. Earlier posts include some photos of the theater being fixed up for the reopening.

Last movie mentioned was in 2018. A music studio is using part of the building. Last FB activity was summer 2019. I don’t think they show movies anymore.

The good news is that the chintzy ‘Showtime’ boxes went off to the dump by 2016, revealing the sides of the marquee again. They’re only a bit rusty after years of being covered. The upper story windows have been replaced by cheapo white plastic frames, which really don’t match the style. That ugly wooden ticket booth is history as well (although I wonder what was under the wood), and the doors moved to the center.

I added a November 2017 photo credit The Town Theater Facebook page, showing those changes. Since the Google Street View is still May 2012.

The Town Theatre was a replacement for an earlier house called the Roxy which was dismantled when the Town opened. The Flora Amusement Company announced plans for closing and dismantling the 360-seat Roxy as soon as their new, as yet unnamed, theater opened, according to Boxoffice of May 20, 1950. Flora Amusement also operated the Florine Theatre. No address was given for the Roxy. I wonder if it could have been an aka for the Casino Theatre?