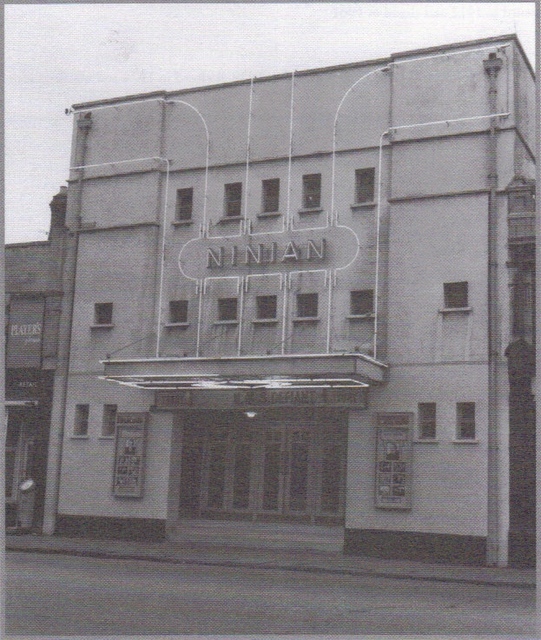 Built in 1913 occupying the site of two shops in a very simple style, but with a small balcony, the Ninian Palace served the densely populated Grangetown area. In the late-1940’s refurbishment was undertaken but disaster struck when a fire broke out in the roof during repairs, and the resulting fire and water damage meant closure for exactly twelve months and considerable rebuilding and re-roofing.

The name “Palace” sometimes appeared in licensing records but was not an appropriate description by any means. After closure in the early-1970’s, it became a bingo club in January 1972, then the building served as furniture store when it was possible to see inside without seating, screen, etc., but otherwise untouched, as it had been from 1950.

Eventually the building was sold, though plans for a J.D. Wetherspoon pub did not proceed and internal reconstruction as a post office and grocery store/off licence was undertaken. Externally much of the building survives as reconstructed in 1950. In 2014 it was converted into an Islamic centre.

Following the closure of the convenience store the building remained empty until June 2007 when sold for refitting as a clothing store serving the Asian community.

Above comment no longer applies.
Architects involved with this cinema were;-
In 1913 H.M.Pritchard and Seymour. (Most plans survive)
In 1950 J.B.Wride (reconstruction after fire, drawings and plan of structural alterations survive.)
The absence of a plan for the Cinemascope installation in 1955 suggests that the new screen and masking (no curtains) were fitted within the simple proscenium, and explains why the “normal” screen was very small.
The Scope screen was only about 22' wide ( at most) but was quite acceptable when viewed from the balcony as the image was fairly bright.
Today’s multiplex cinemas of similar dimensions would have a 32' screen but only about 160 seats. Our grandparents were happy crammed in tightly with no leg room.

The archived plans show that the proscenium opening was 22' in 1950 so the Scope screen was probably less.The architect in 1950 shows the screen to be only 10' high .

As far as the Jackson Withers projectionists were concerned, the Ninian Cinema was a pig to operate. The box was extremely cramped with the two ancient GB Kalee open head projectors located in a pit at the front of the box. Change overs were by means of plates and a central sound switch. The two rectifiers were at a higher level. Drapes were not used and masking was manual although controlled from the box.

Lighting consisted of one slide dimmer that operated the house lights and another that put up a mix of colours beneath the screen.

The box was always uncomfortably hot and ventilation limited.

Attempts to find a picture of the Ninian Palace as originally built have so far failed. The plans do not contain a front elevation but suggest it might have been similar to other smaller cinemas being built at the same time.The concrete frontage with metal window frames almost certainly dates from the repairs after the fire in 1949.

Planning application approved to convert to an Islamic centre and school

Why the name Ninian?