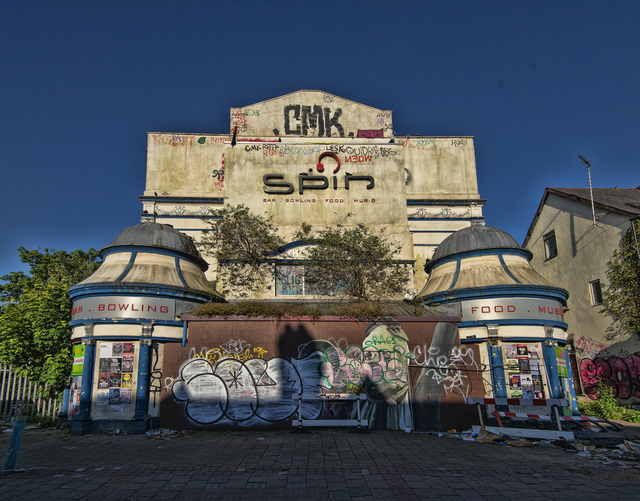 Opening as the Gaiety Grand Cinema in 1912 it originally had a seating capacity of 800. The most notable feature of the facade was a pair of small domes which were on either side of the entrance.

It was re-modelled and enlarged in 1934 by architect William S. Wort and the seating capacity increased to 1,518. From 1956 it became part of the Jackson Withers Circuit, but they closed it down in 1961 and it went over to bingo. By 1976 it was operated by Top Rank Bingo and this remained until 1998.

After closure as a bingo hall the building was unused for a while. Eventually it was re-modelled internally to two floors, for 10-pin bowling and bar/restaurant, and the “domes” were restored.
A cinema poster from the 1930’s was framed on the bar wall.

This venture did not succeed and closed in 2006, the premises are currently vacant.

Original architects drawings may be seen at the Glamorgan Record Office, and reveal that buiding was originally planned as a skating rink and cinema.

When Bingo began in July 1961 the tremendous success of the game in the Coliseum (Canton)owned by the other local operator, Rex Willis, encouraged the Jackson Withers Circuit to introduce Bingo into several of their cinemas , starting with the Splott, on a part-time basis, either Sunday to Wednesday or Thursday to Saturday.
In September 1961 the Gaiety was the first of the Group to go over to 7-day Bingo but others continued showing some films until at least the following year.
The unusual external architecture of the Gaiety was preserved, and indeed restored in later years, and a few features survived in the two bar/bowl floors in the most recent conversion.

September 2007- a planning application to re-open as a bar, with proposed building alterations.

There’s a nice gallery of images of the buildings interior here, from around 1991 when it was the Top Rank Gaiety Bingo Club. Quality’s not great I’m afraid, but you get the idea of the style of the building.

I visited the Gaiety many times as a child when staying with relatives in Roath. Later I did some sessions there as a Bingo checker. One of the great failures of the Gaiety’s design were the two shops either side of the entrance. They were rented out to independent retailers for a great variety of retail purposes. Every time I visited the place the shops seemed to have changed hands. This rapid change over of tenants continuing during the early years of Bingo.

The derelict building occupied by squatters has been a sorry sight , partly covered in scaffolding for some time, and an application to demolish it has been made, according to a report in the local news media (walesonline.co.uk)