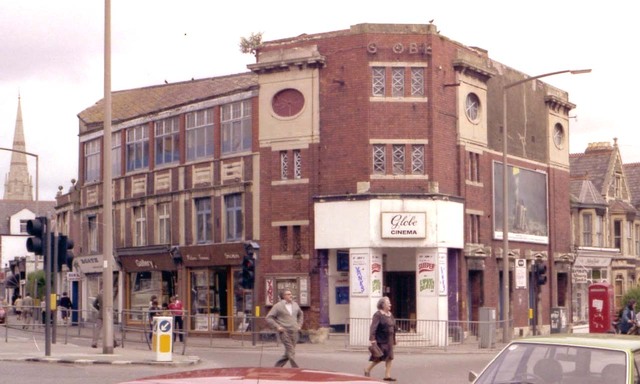 Built on a corner site with a small entrance decorated with two statues and surmounted by a globe, this cinema is fondly remembered by many.

Opened on 27th August 1914, when “every patriot should patronise this British-owned and controlled cinema” (in the words of the advertisement of the opening), the interior was attractively decorated in classical style with eagles and the initials “PC” near the domed roof, which could be opened for ventilation (at a time when most patrons would be smokers). The firm of Willmott and Smith were named as the architects, though original plans do not appear to be available.

The name Globe was adopted from about 1931 when sound was installed and the cinema was later acquired by local owner Rex Willis and operated with the Coliseum and Rialto, (both of which had opened by 1914), often showing the same programme as one of these. In the post-war era the Globe specialised in “continental films”, usually subtitled, and was adapted for CinemaScope with a screen surrounded by plain board and without masking. The statues at the entrance were hidden behind boards advertising the programmes.

Bingo was tried for a short time in 1961 in an effort to follow the success of the game at the Coliseum, but films returned, gradually including more mainstream material often in double bills at very reasonable prices. It is understood that a dedicated team of long-serving staff operated the Globe into the 1980’s when local students formed most of the regular patrons.

When the Capitol Cinema closed in January 1978, some seats were acquired and fitted into the Globe, but otherwise it remained, in the words of one patron “a step back into the days of the Bioscope”, and acquired the status of a Grade II Listed building. Despite attempts to save the Globe Cinema, it closed on 25th May 1981 and an appeal was held to lift the Listed status of the building, which was granted in late 1986 and the building was demolished in 1987.

It was replaced by a group of shops above which was a small cinema, christened the Monroe by Brian Bull, who operated this plain but well-equipped auditorium for some years. It was taken on for a while by Chapter Arts Centre, then a Bollywood venture, but has remained closed for several years.

Advertised as Globe (late Penylan) in April 1930 shortly before first mention of sound .

So many great memories of this cinema, I still get dreams about it every so often. I went there between 1977 and the time it closed. I recall seeing Star Wars there when it first came out, and my father would take me regular. The auditorium took up most of the building. There was a ticket stall in the porch area of the building, which is where they sold the sweets and stuff as well.

Once you went past the ticket booth you had two options – go into the down stairs through one door or go upstairs up a winding spiral staircase. If my recall is good, the toilets were in the middle of the spiral up to the balcony. At the very back of the balcony area was a single L-shaped seat that could seat 3 or 4 people. That was where we always sat (when we could get it!) I’d love to see some interior photos of it one day, there’s not many about.

What a wondrous place!
I was there in 1978,1979 & 1980
I rememember the “dash” to the Claude afterwoods
There was a “pile” of broken seats at the front, do you remember that? and Oh! that dizzying staircase
The entrance fee was only 50pI guess you could smoke in threre in them days — seems inconceivable now
I am desperately(?) always seeking photos of the loverly place for ourourourour Reunion website www.psyreunion.com
I’d certainly be interested in an Globe Cinema Appreciation Society
pajamahead

In November 2008 the former “Monroe” has been renamed “Globe” and opened as a live music venue.

The Globe was owned by Willis Cinemas who had their offices in the house next door in Wellfield Road. In the 1960s it was managed and operated by Ken Wardle and his wife. The entire staff being four people. Mrs. Wardle, a lady of German origin, manned the ticket box at the front of the cinema whilst two usherettes looked after the balcony and the stalls respectively. These two ladies also cleaned the cinema each morning. The projection box contained two GB Kalee 12 arc projectors and sound heads. Power was provided by two Kalee mmercury arc rectifiers – one for each machine.

The two projectors were fitted with cinemascope lenses. However, the cinema possessed very poor masking. Thus when a scope film was being shown with a flat screen second feature, the masking was left open which gave the flat presentation very rough edges.

In the early years the cinema was fitted with an DC generator that was driven by mains AC current. The generator was kept on at the cinema when the later Kalee arcs were installed and used as a backup should one of the Kalee arc rectifiers fail.

Ken Wardle, who managed the cinema, usually started the show at about five pm each day.Later a part time projectionist would arrive at about 6pm and take over the box.

Ken Wardle then departed to his other job which was that of bingo caller at the Canton Coliseum Bingo Hall which was also owned by the Willis Circuit. One day a week he would travel to yet another Willis former cinema named the Gorki Hall at Abergorki where he again called bingo.

There seems to be some confusion about which member of the Willis Family founded the Willis circuit. The Willis circuit was founded by W.E. (William Elias) Willis who was a native , I believe, of Tonypandy.He was still alive in the early 1960,s residing in a house in Wellfield Road that was immediately next door to the Globe.This house was used as the registered head office of the Willis circuit. His son Rex Willis, a noted Welsh rugby player, had taken over the general management of the circuit by 1961.

I’ve just published a small volume of photos of The Globe, Cardiff that I took in the early 1970s – auditorium, back offices, projector room. Google ISBN 9780992989804 if you fancy tracking down a copy.