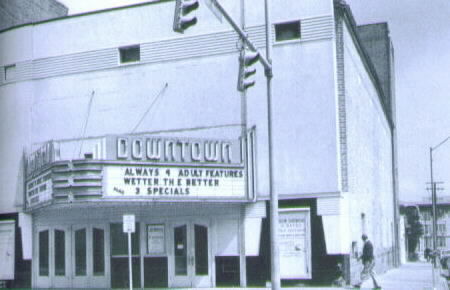 Downtown Newport News, by William A. Fox (Google Books preview), gives a brief history of this house. It was in operation as the Olympic Theatre prior to 1931, when it was taken over by Publix, remodeled, and renamed the James Theatre. Publix operated the house only until 1934, when it was taken over by the local chain Dominion Theatres. At some point it was renamed the Downtown Theatre. In its last days it showed adult movies, and was closed in 1978. The roof of the theater collapsed on January 12, 1983, leading to its demolition.

The caption of this historic photo from the Newport News Public Library says that the Olympic Theatre was built in 1911. I found a period source indicating that the house was in operation by December of that year.

The Library of Virginia’s weblog, Out of the Box, has an interesting item about a performance that took place at the Olympic Theatre in 1912, leading to the arrest of the theater manager and a dance troupe. That younger generation! What was the world coming to?

I just posted a news story in the Daily Press Newspaper showing the Oct. 17, 1910 date. Check it out

This opened on August 9th, 1967 as Downtown with “The Sound of Music”. Not the 4th as wasser reports. Started to show adult movies by the end of 1967. Grand opening ad in the photo section.

While they may have had a Grand Opening or something on Aug 9th as reported by rivest266, on Oct 4th, they reopened at 5 p.m. playing a double feature while advertising that they were also renovating. See ad just posted in photo section.

I Don’t Know If Either The James Or The Paramount Has An Installation Of An Iron Fireman WhirlPower Space Conditioner, Installed And Serviced By Spiers Service Authorized Distributor Of 2214 Wickham Avenue, Newport News, Both 1.5 Miles Between Both Theaters And Spiers. I Think It Came From The James, But I Could Be Wrong Though.