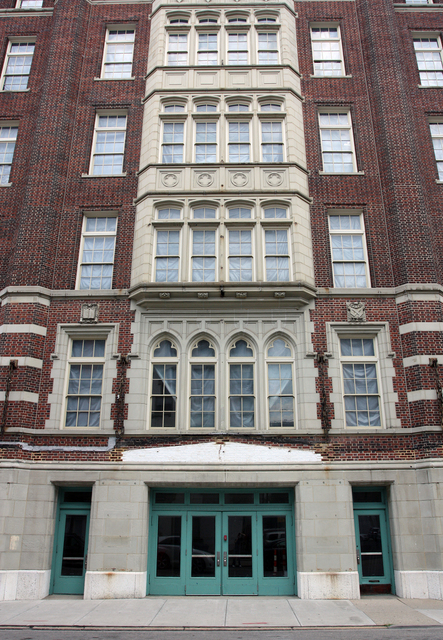 The Emery Theater was built in 1912 as the auditorium for the Ohio Mechanic Institute building, a trade school. By 1950 it was operated by the Mid-States Theaters Inc. From 1978 until 1999 the American Theatre Organ Society ran silent and sound films here.

Prior to its film years, the Emery Theater was home to the Cincinnati Symphony Orchestra from 1912 until they moved to the Music Hall in 1936. On the Emery Theater’s stage over the years appeared Russian ballet dancer Nijinsky, actresses Bette Davis and Katherine Cornell and composer George Gershwin, who played his famous “Rhapsody in Blue” with the Cincinnati Symphony Orchestra shortly after he had premiered it at Carnegie Hall in New York.

The Emery Theater, which is now closed, is owned by the University of Cincinnati.

The Wurlitzer Organ from the RKO Albee Theater (1927-1974) was moved to the Emery Theater in 1969 and totally rebuilt in the space of eight years. The organ pipes were placed on the rear portion of the stage and for the next twenty years silent, sound, and 3D films were shown on the weekends. The original seating of 2,200 was reduced to 1,360 by closing the second balcony to the public.

The architect for the Emery Theater was Harvey Hannaford of the famous architectural firm of Samuel Hannaford & Sons, which also designed the 1878 Music Hall, 1908 Memorial Hall, Cincinnati City Hall and many other impressive structures in Cincinnati.

The l927 Wurlitzer organ from the Albee Th.,moved to the Emery Th.in 1969 where it took 8 years for volunteers of Ohio Valley Chapter of American Theater Organ Society to rebuild it and operate it for twenty plus years as a movie and stage show and concert venue. After ten years of storage and reconstruction the Wurlitzer has a new home in the Cincinnati Music Ballroom where its premiere concert took place Nov.28,2009 with 700 ticket holders reveling in its sounds and looks. The organ now has a grand piano added to its sound choices.

I should have added that the new home of the Albee/Emery Wurlitzer Organ is in Cincinnati"s Music Hall Ballroom located on Elm St.

There are six pictures of the Emery here: scan down to see them: View link

Hello ,just a slight correction
about one of the 6 pictures listed on the (cincinnatis-forgotten-theatres.html) at the Emery Th. the shot showing what is refered to as (mechanical levers) were not used to controll the curtains, but that is an unconnected lighting switchboard which was rebuilt by the (late Lyman Brenneman) to controll all the lighting above the stage as well as balcony spots and house lights. The curtain controll motor was on a seperate wall and the motion picture screen was flown to the fly gallery using a motor on the opposite side of the stage. The Picture Screen is probably still high above in the fly gallery on a heavy pipe frame,however the motor that raised it has been disabled. I know some of this info from having volunteered at the Emery Th. for 14 years and stage managed some of the shows useing that lighting switchboard to accomodate the performances.

Cincinnati’s last great theater. During the early 80’s I got to see some wonderful movies through the weekend series. So much of Cincinnati’s downtown area has been flushed right down the toilet by thoughtless city planners and developers. Let’s hope the Emery can beat the odds and be saved.

There are current events that happen at Emery Th. as a turnaround is attempting to take this venue into the 21 Centuryas a vital performing space.

currently the Emery Theater is inactive pending a law suit against the university of Cincinnati which comes up in Feb 2014.

Nothing new on the Emery Theater proceedings between Renaissanmce Project and the University Of Cincinnati,still a grid lock out side of the courtroom!

During mid 2019 the University placed the Emery Th. for sale,but no plans for renewal have surfaced. The picture black and white of the Emery facade with the large 3D letters and numbers is not from l953, bit in the 1990’s. I should know…. I placed them in the doors at that time!

Really nice place and very impressive venue. In 1976, the Emery staged the show “Welcome Back, Beatles”, taking advantage of the mid-70’s Beatles revival. Did anyone else see that show?