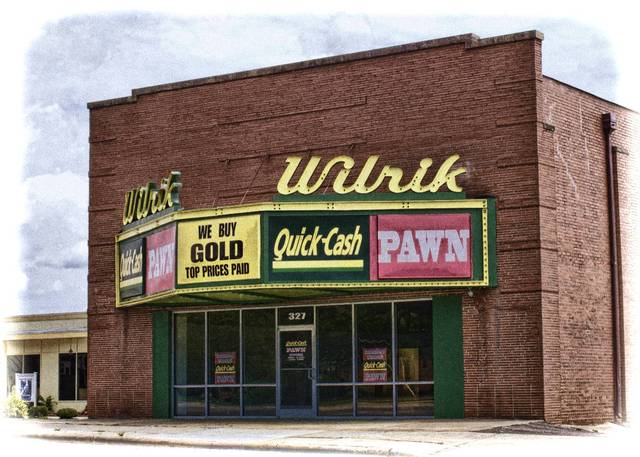 Opened in 1955, the Wilrik Theatre in Sanford, NC is closed and is available for sale or lease.

The Sanford City Council was considering a proposal to turn the Wilrik into a performing arts center in September 2004. Since the theater is currently listed on loopnet, nothing came of that idea, I would assume.

Resolution was approved supporting and authorizing the submittal of a predevelopment grant application to the Rural Center of North Carolina and authorizes the City Manager to sign on Councilâ€™s behalf. The Building Reuse and Restoration Grants Program was designed to spur economic activity and job creation by assisting in the productive reuse of vacant buildings in a distressed area. There are two types of grants. The development grant would offer $400,000 to a developer who has clients lined up and just needs to up fit the building. The predevelopment grant is for soft costs for an owner/developer to see if their project would be potentially viable. Soft costs are feasibility assessments, marketing analysis, architectural/engineering analyses, and legal costs involved in the project. The maximum grant is $25,000 to be used for soft costs. The developer would match the $25,000 predevelopment grant with $5,000 and local government must provide at least $1,000 which would come out of the DSIâ€™s budget.

DSI felt that a requested submitted by Bill McDonald to convert the Wilrik Theatre into a performing arts center would be a viable project.

Current For Sale listing for the Wilrik

Picture of the neon on the Wilrik sign, all lit up….

The related site is no longer working. Here is another photo of the Wilrik:
http://tinyurl.com/ya4r59y

Hey Ken, look at the For Sale listing I posted on Feb 7th. That’s the new related site, just has to be updated…..

I still remember Dad coming home early back in 1980 to take me to my first movie – The Empire Strikes Back – at the Wilrik! I’ll always have a soft spot in my heart for that place – it gave me a great memory with my dad (I have few) and it was the birthplace for my absolute love for movies. If I were a man with unlimited means I would buy the old Wilrik and refurbish it as an art house theater and show retro screenings one night a week… (who knows how that would work in little Sanford). Its a beautiful little theater – at least it is in my heart

I worked there in ‘81, when I was a 19-yr-old college dropout. Bill Mawyer was the manager and I was the projectionist and ran the concessions stand in the lobby. Screened many memorable movies that year, including the one mentioned in the post above. Also An American Werewolf in London, Stripes, Raiders of the Lost Ark, Arthur, Excalibur, and many others. It’s sad to see it disused and long-empty now—it was pretty lively on Friday and Saturday nights back in the day.

The WILRIK Theatre closed in 1985 under Stewart and Everett Theatres.

During the 1970’s and even into the early 1980’s,Stewart and Everett control all of the moviehouses in Sanford.