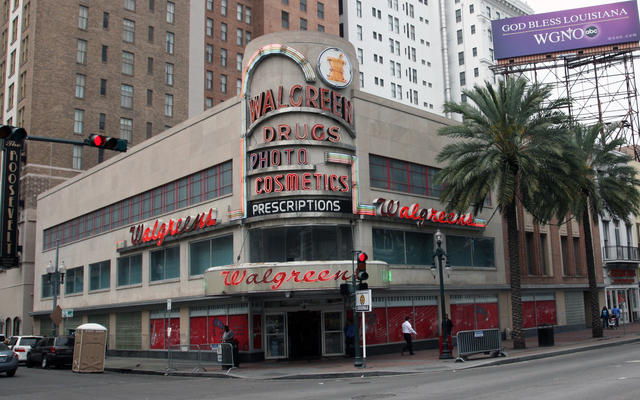 The Wonderland Theatre was opened by 1926 when its address was listed as 934 Canal Street and it had 325 seats. In 1934 it was parially destroyed by a fire. It was renovated and reopened as the Center Theatre October 26, 1936.

It was remodeled in 1967 and after a period of operation by Mann Theatre and then Nation General Theatres it went over to screening adult movies. It was later renamed Cine Royale Theatre. The Cine Royale Theatre had a tall vertical sign attached to the front of the building spelling out the name along with a flat box shaped marquee that said “Cine Royale” across the front.

Here’s a very nice photo of the Center:
http://louisdl.louislibraries.org/u?/CLF,6009

I can remember visiting drive-in-mike at the Cine back in the late 70s. Mike and I have been friends since the seventh grade and our friendship has endured into our 50s.

The name of this theatre should be the CENTER theatre, just as the State Palace should be under LOEWS or Loews State. Those are the names that most people would recognize these theatres.

Before the Center Theatre went to sleazy adult entertainment, I remember seeing “The Atomic Kid” starring Mickey Rooney there. That movie was from 1954, but I think it wasn’t a first run at the Center, so it could have been a few years later.

This opened on April 18th, 1968. The grand opening ad has been uploaded in the photo section.

Well friends, let’s go back a bit further. The theatre at 912 Canal Street was first known as the Wonderland, and was acquired by Henry Lazarus in the 1920’s. He already owned the Newcomb Theatre, next door, at 908 Canal Street. In 1934, they lost their lease on the Newcomb. In 1934, there was a fire that partially destroyed the Wonderland. Mr. Lazarus gutted the entire theatre and built an entirely new modern theatre. It opened on October 26, 1936 as the Center Theatre. The Lazarus family operated it until 1967, when Isadore Larazus had a heart attack. It was completely remodeled, then leased to National General Theatres, then to Mann theatres, then to George Echols, who changed the viewing policy to adult films, then to Essex. one of the better adult theatre operators. As for those who dislike the fact that ‘sleeze’ product was shown at some of these theatres, I have a differing opinion. If adult movies had not continued to keep some old theatres operating, such as the Paris (circa 1903) the Cine' Royale (1920’s), the Cinerama (circa 1963), the Tiger-Riget-Grit (circa 1950), they would have closed, probably been demolished, and I would have never had the opportunity to work in these fine historic theatres, and learn about the rich history that took place at each though the years. So from my point of view, I am very happy that these theatres were open when I began working in the business (1972). It allowed me to have the opportunity to learn more of the history of these incredible classic theatres, regardless what they were showing.

1950’s night photo added courtesy of the Americas Past In Photos Facebook page.

When I began to take trips to New Orleans, back in 96 is when I went to it as an adult theater, to enjoy consenting adult entertainment.T he last time I went to that theater, a year before it closes, the manager it into a double theater, For one price you can go upstairs and downstairs to see double feature up stair and double feature downstairs . The downstairs auditorium had two big t. v.’s and one big screen in the middle. A year late it became a pawn shop or jewelry shop. I do have a picture of it too, but, I don’t have disc copy to upload it to show you. I think I got before and after. I will have to check.