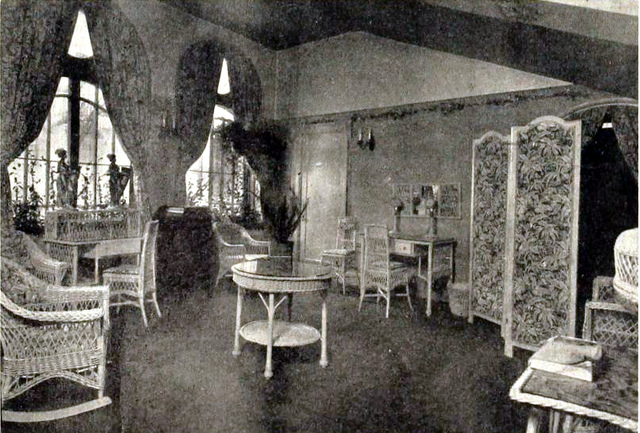 In 1913 Walter Foster and George Kleiser opened the Columbia Theater in Portland, Oregon. That same year, a Kimball theater organ was installed. It was taken over by Universal Pictures chain in May 1926.

PORTLAND (Or) May 25-The trial of D.J. Myrick, manager of the Columbia Theater, charged with felonious assault upon Adele Eils, his pretty girl cashier, came to a dramatic end here today when Myrick’s attorney announced that his client would plead guilty and Myrick confirmed the plea, sobbing aloud as the girl, in a state of hysteria, was led from the courtroom. The attack was made last January in Myrick’s office at midnight.

Photos of the facade and auditorium of the Columbia Theatre appeared in the December 20, 1913, issue of The Moving Picture World. Here is the text of the accompanying article:[quote]“According to information received, the Columbia Theater, of Portland, Oregon, is without peer. It is strictly a photoplay house.

“This magnificent building, which is entirely fireproof with the exception of the carpets and draperies, was built at a cost of $125,000. The building is constructed of concrete and steel and is located in the most central section of the downtown district. The record in construction was brokenas shifts were working night and day and within 90 days after the last shovel of dirt was excavated, this building was thrown open, and has ever since been the passing of leisure hours for Portland’s most exclusive society people.

“The inside is artistically decorated. The entire theater is carpeted. One of the features of this photoplay house is the beautiful ladies' rest room which is carried out in the Louis XV style, and cost about $5,000 to furnish. Nothing takes so well with the ladies as this lovely lounging place where the society ladies gather and then attend the entertainment en masse.

“Eleven hundred hidden lights are used inside. An interchangeable air system is employed where the air is changed twelve timci an hour by a process that is washed with the famous Bull Run water.

“The outside is of white terra cotta and brick and has a total outlay of 2000 lights. The seating capacity is 1200. Two No. 6-A Power’s machines are used. The operating booth is of steel with cement coating. The theater uses eight pictures a week from the General Film Company.

“The Columbia is owned by W. F. Foster and George W. Kleiser, and is managed by O. F. Bergner. who is a member of the Executive Board of the Moving Picture Exhibitors' League of Portland.”[/quote]

It is to bad this site is so closed off.. it took me a while to get to this point.. I have 7 old Columbia window boards from a few movies and wine entertainment night with Clara Bow that started on Sept. 6th I was gong to offer a few. But I just do not have any more time..