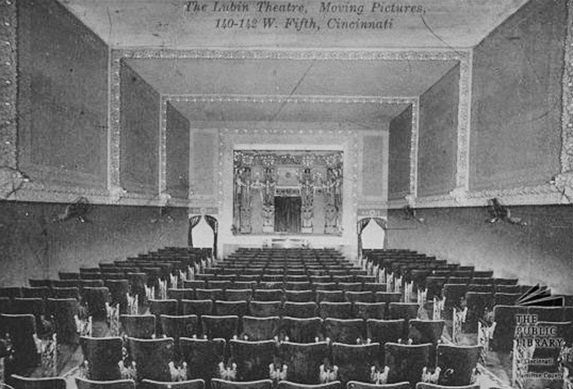 Owned by Siegmund Lubin of Philadelphia and managed by the Hennegan Brothers of Cincinnati. The brothers later bought the Lubin Theater from Lubin, and ran the theater retaining his name. The Hennegans also had a small string of local nickel shows. Still later, they formed the Hennegan Printing Company and printed many movie posters for all the major studios in Hollywood and New York. Around 1915 there was even an announcement of a studio soon to be built in Kentucky to produce feature films, but nothing ever came of this proposal.

A conversion of a clothing store, the Lubin Theater was along a stretch of Fifth Street W which had about five or six early nickelodeons. This theater opened in January 1909. It was closed on April 29, 1930, last operating as an African-American movie house.

The Lubin Nickelodeon opened in 1907 and closed April 29,1930 the final manager of this house was Moses Wilchins who died at age 70 in 1965. Wilchins was also the manager of 3 other early nickel shows on 5th.St.they were The Ohio,Colonial,And The Avenue Theater. Moses worked for the Frankel Bros. Realty Co. who owned many theaters in Cincinnati also Newport,Ky .

Mr. Lubun of Phidelphia was an Eye Doctor who was credited with offering free eye exams to his patients, and what better business to morph into after selling them new glasses than the cinema field. Lubin set up a production company to supply films for his enterprises,sounds like he learned early what the Warner Bros. realized that the man who eliminated the middle fellow was far ahead of the game. Apparently the free eye exams idea was adopted by many other eye firms in the early glass selling days, sadly it doesn’t continue today. This Lubin Cincinnati Th. must have happened not long after Marcus Loew had opened his Fountain Square penny arcade here in 1906.

In its closing days The Lubin was part of I.Frankel’s chain of cinemas including The Alhambra,Crystal,Colonial and Ohio theatres, many were originally built for the Jackson-McMahon string of Cincinnati houses. Frankel’s last surviving theatre,The Avenue, was constructed in 1915,located at 122 Fifth St.,it lasted into the early 1940’s. Today the site is a Macy’s Dept. Store.

The Lubin Th. and the Alhambra Nickelodeon were beside each other but seperated by a bargain clothing store on West Fifth Street.Both of these structures started live as retail stores and the movies just converted them.