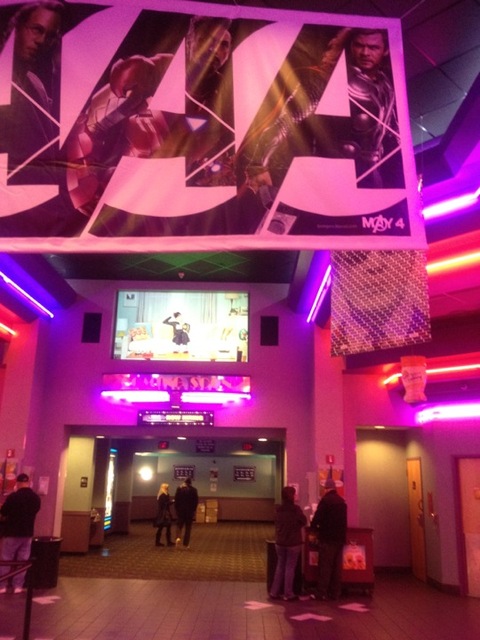 Opened on June 6, 1997, in Brandywine Town Center near Concord Mall.

OK, if it wasn’t them, then who were those Secret Service guys?

By ANGIE BASIOUNY
The News Journal

He’s a heartbeat away from the presidency, but that apparently didn’t help Joe Biden get a movie ticket Saturday night.

Employees at the Regal Brandywine Cinemas say the vice president-elect and his wife, Jill, tried to attend the 7:45 showing of “The Curious Case of Benjamin Button” at the theater on Concord Pike but left after they were told the movie was sold out.

There’s been no confirmation from the Biden camp, but the theater employees say they are sure it was him.

Inshirah Muhamut, an associate manager, said she closed her box-office line when she saw what appeared to be a Secret Service agent coming her way.

The man asked her about tickets for the movie, which stars Brad Pitt, then left.

A few minutes later, she said, the Bidens came into the lobby.

Jill Biden walked up to speak with Muhamut while Joe stood nearby.

“She was asking me about other shows, but they really wanted to see ‘Benjamin Button,’ ” Muhamut said. “He was maybe five feet away, looking at her. He was standing with his other Secret Service men.”

Remarkably, none of the other moviegoers appeared to notice. Employees said nobody mobbed Biden or called his name or asked for an autograph.

“It didn’t seem many people recognized him,” said employee Becky Gingrich, 21. “Honestly, I think people were just too wrapped up in themselves to notice.”

The brush with Biden did give the employees a thrill, though.

“I was a little excited — I’m not gonna lie,” said Muhamut, a 21-year-old senior at West Chester University. “The Secret Service guy told me to calm down.”

Muhamut plans to go to the Jan. 20 inauguration, so seeing the Bidens up close was a kick.

“I recognized him as soon as he came up,” she said. “He had a black jacket and jeans on. He looked real casual. His wife had on a very stylish jacket.”

Gingrich and Muhamut said the Bidens didn’t ask for special treatment. They simply mulled over their movie options and left.

“We’re just so crazy in here tonight [with patrons] that we would have had to go into the theater and move people around,” Gingrich said.

Nice to hear people in Delaware are still attending the movies, however limited their options are. When i was growing up in Wilmington in the ‘70s we had several places to catch 1st-run films, theaters that started out as single huge houses seating at least 1500 to 2000 patrons, but were then multiplexed as the decade wore on. Anyone out there recall Concord Mall Cinema, Branmar Cinema, the Eric Concordville on Rte.1, Tri-State Mall twin cinemas, the West Goshen twin cinemas, the old Warner downtown, Cinemart, the theaters in Price’s Corners, the Edgemoor? Further afield were the State in Newark, the old Warner in West Chester, and a few drive-ins like the 202 in West Chester, Price’s Corners, and Newark. Most of my movie-going was confined to the Concord Mall cinema, Branmar Plaza cinema, and Tri-State Mall twins. I watched THE POSEIDON ADVENTURE on 10 successive Saturday afternoons at the Branmar Cinema when I was 10 years old. I would sit through back-to-back showings of films like THE GREAT GATSBY, THE DEEP, KING KONG ('76 version), and BLACK SUNDAY at the Concord Mall cinema. Hey, I was kid with not much to do in the suburbs of Wilmington, DE.

I heard Brandywine Town Center opened in spring 1999, but other sources say 1991 (which makes most sense to me).

i first saw con-air here. so what ever year that came out, thats the year it opened. i belive it was 96.

I remember hearing the story Former President Carter went to a GCC theatre in Atlanta and the Secret Service having to clear out the mens room.I think it was Perimeter Mall Cinemas.

I can say, definitively, that this theatre (the first in Delaware with stadium seating) opened to the public on June 6, 1997. It had some preview promotions before that, but this was the official opening day.

The original concept was to have a three-floor entertainment center with the theatres on the third floor. The first and second floors were part of a venture called FunScape, which had amusements like miniature golf, motion ride/simulators, a carousel, a Go-Kart track, video games and ticket-dispensing skill games (Skee-Ball, free-throws, etc.). The first floor also had some basic food court offerings like a Dairy Queen and a pizza place. The idea was to attract families and parties to eat, play and see a movie. My experience was that local summer camps would bring bus-loads of kids there to spend the day, but not every kid had money to spend, so it was crowded and the paying customers turned around once they saw all the dining seats taken up, videogames occupied by kids watching the demos (but not actually playing them), and general congestion.

After a few years, the FunScape stuff started to go away and was fully gone in the early 2000s. Some businesses set up offices there after a re-modeling and now the theatre uses an entrance on the other side of the building, which leads to a huge lobby with ticket booths, some games and restrooms.

The screens are still on the third floor along with concession stands. Of the 16 screens, I think 10 are stadium configurations. Screens 12 and (I think) 6 are the two largest with nice, wide auditoriums. Screen 12, for sure, has two areas in the stadium section where the stair aisle goes up a few rows, then turns in for about three feet before continuing up to the top. This creates two areas on either side where there are two seats with nothing in front of them and are ideal for streching out.

I’ve seen about 120 movies there since that opening day, most within the first 5 or 6 years. After a while, the freshness wore off and my experience with Regal souered. I understand the need to make money, but Regal seemed to try every new trick in the book to get more money out of every person who walked in the door: weekend evening prices starting at 3:00 in the afternoon, $10+ tickets, $7 popcorn, non-stop assaults from commercials and ads, etc. Worst of all: poor customer service. If the sound goes out, the picture is scratched or some other distraction takes place, don’t expect much satisfaction.

I’ll end on a positive note: due to the number of screens they have, they have been able to bring some smaller films to the area, which normally would not have been available because other theatres don’t have the space. Also, they sometimes show movies well before noon, which is great if you have places to go on the weekends.

Does anyone have pics of the FunScape?

This opened as the largest theatre/entertainment complex under one roof in the USA according to the June 6th, 1997 grand opening ad that can be seen in the photo section. If you count the Iwerks motion simulator, you may count it as the 17th screen.

Another one opened in the Syracuse, NY area.

Exterior pictured in news article on Regal closures for the duration of the pandemic.