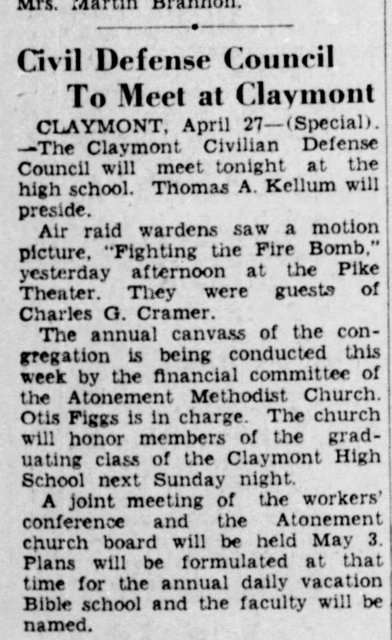 Dock Edge has closed his Pike Theatre in Claymont, Del. because of loss of business resulting from reconstruction of Route 13.

Where exactly at that intersection was it? Darley Inn and the Claymont Stone School are both historic buildings so it wouldn’t have been on those corners. And I think Archmere’s been around awhile. Was it where the Food Lion is now? Although that’s the Darley Road side of Phila Pike, not the Myrtle.

I can’t imagine it lost business as early as 1950. It was right near Brookview Apartments, which was a huge complex in walking distance of the theater.

An Exxon service station now stands where the Pike Theatre once stood.

Does anyone have any photos? Also, who the architect was and in what style, and the dates it opened and closed? Please share. Thanks!

The nearby Brookview Apartments weren’t built until 1953-1955, evidently after the theater closed. I don’t know what the highway reconstruction may have been that is given as a reason, other than the road was widened to four lanes (from two), somewhere around that time. I remember the theater building after the widening, the sidewalk in front had been narrowed some, but was still wide then – I don’t know what effect that would have had. I don’t know when it closed – or should I say I don’t remember when it was open, but the building was used for fire school training in the 60’s, by the local fire company, and in one of those training sessions, a small fire built in the upper floors got away from them, and the building was damaged beyond repair, and had to be demolished (which was the intent anyway, after the training sessions). As I remember the building, it was just a square 3 or 4 story, wood lap-siding, I believe, with an iron marquee on the front side. The building was on the NE corner of the intersection, where the Exxon is, today, as TheALAN states.