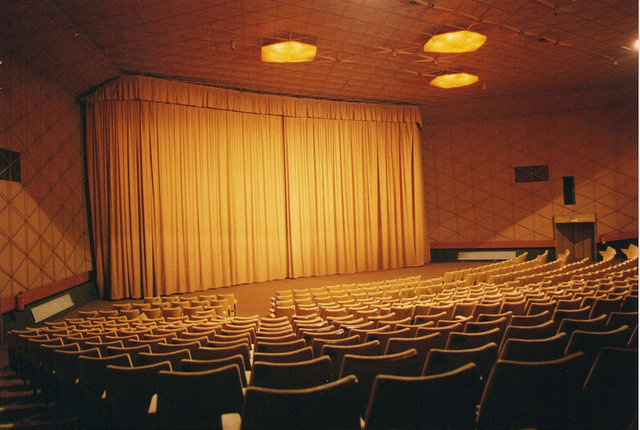 Editions of Kine Yearbook 1939 – 1941 list an Odeon Theatre under contruction by Oscar Deutsch’s Odeon Theatres Ltd. It was located on High Street and was designed by Harry Weedon with a seating capacity of 2,414 seats. However in reality with the war progressing, nothing ever came of this scheme, and it was not proceeded with. Swansea had to wait almost 30 years before the town got an Odeon……..

The Odeon was a new modern cinema that was built by the Rank Organisation on the site of the Plaza Cinema. It opened on 17th May 1967 with Julie Andrews in “The Sound of Music”. It was designed by the architectural firm of Cassidy, Farrington & Dennys in a typical 1960’s style with clean modern lines. The seating capacity for this single screen cinema was 1,378. It was located above a new supermarket and other retail shop units.

The building was converted into use as bars and a nightclub; the three spaces are named Jumpin' Jacks, Time, and Envy with a total capacity of 4,000. It was closed around 2014 and the building was demolished in November 2016.

Side view of the rear of the Odeon auditorium with the overhanging projection box part of the building over the old terrace area.
http://www.flickr.com/photos/curtians/2221775832/

Looking back at the very first photo on the top the page it makes a sorry picture of how the building has been left to decay the way it has.

I remember seeing Chitty Chitty Bang Bang here when I was 6 years old. I happened to look back to the projection room (I was fidgety) and caught a reel change-over. From that point on I wanted to be a projectionist, and eleven years later I joined the Odeon Swansea projection crew. The first film I showed was Moonraker, followed by Alien (which I wasn’t technically old enough to see).

I have to say, the time I spent there was the best period of my life. Putting on a good presentation, and the beauty of that 50 foot screen brought me so much pleasure. Breaks my heart to see what they’ve done to it

Such an amazing cinema. Despite the lack of tabs and ornamental decor, it just seemed to have the right “feel”. The Empire Strikes Back was a highlight of my life here!

Ironically, the UCI at Parc Tawe was a HORRIBLE place but since rebranding as Odeon it’s so much nicer with decor and colour schemes that remind you of and Odeon, even if there are still no tabs. I find Vue very much sterile and horrible (pretty much like the old UCI) but for some reason the ODEON on Kingsway was magnificent – although being designed in the 1960s, it shouldn’t have been!

It certainly knew how to present a film.

When on holiday in South Wales in 1990 I visited the Odeon Swansea,it was a scorching June day (remember them?) The projectionist (who’s name I do'nt recall) very kindly showed me around all 3 screens.

I seem to recall that he told me the projectionist’s had to lose their wash room to accomodate a third screen. We never had such comforts, if you needed a wash or whatever, it was down endless flights of stairs, and even worse up again !

I think that the people residing in the cities are very lucky in being able to compare one multiscreen against the other, our nearest multiplex the Cineworld LLandudno Junction is 50 miles from Pwllheli, and although the seating is extremely comfortable there’s no showmanship involved in the film presentation. I like many on the Cinema Treasures posts love tabs.

This is an exterior view from June 1990.
View link
View link

Pange’s comment above that he was technically not old enough to work during the run of “Alien” reminded me that soon after I started as a junior projectionist,I was told by the chief that I could not work during the run of the “Little Hut” which had an X certificate, it starred David Niven & Ava Gardner.
Now this was 1958, and fifteen year old’s were much more naive than today’s youngsters,so I stayed home on the first evening of the film’s run. only to find that when I turned up to work the following morning it was a big wind up.
So everyone had a big laugh at my expense, the cinema in question was the Town Hall Pwllheli,which is still open under it’s new name Neuadd Dwyfor.

What a fabulous cinema the Odeon Kingsway Swansea was, particularly in its original one screen design. I have such fond memories of it. The first film I ever saw in a cinema was there having been taken by my mother, bless her, at a tender age of 8 years. I seem to recollect it was 1969. The film being shown then was the 1968 musical ‘Oliver’ arguably the greatest film adaptation of a musical. Anyway I remember being in awe of the sheer size and stunning ambiance of that cinema and that giant screen, with the mood changing lighting of the auditorium before the film commenced. It was such an event from that moment on to go there and see so many films over the years, such films as, ‘Rollerball’, ‘Carrie’,yes I was under age but managed to get in ;), ‘Close Encounters of the third Kind’, and ‘Alien’, come to mind for the sheer effect from viewing them on that monster 50 foot screen and the great sound generated through such a vast auditorium. The opening sequence of ‘Close Encounters’ was mind blowing. Together with what I remember to be such comfort with lovely seating and plenty of legroom too. From the time you entered the building at street level next to Tesco, which should have been an ice rink, shame on you Swansea Council!, and climbed those stairs which doubled back on themselves leading up to the big open foyer and then more stairs up to the auditorium after purchasing your ticket, the build up to the film being shown seemed to be such an event in itself. Wow such nostalgia he says with almost a tear in his eye. Such days could never be recaptured, but will never be forgotten!

The local authority announced in May 2015 that it had purchased the site with a view to demolishing it for offices. There are few bars around this stretch as the drinking culture is now centred around Wind Street.