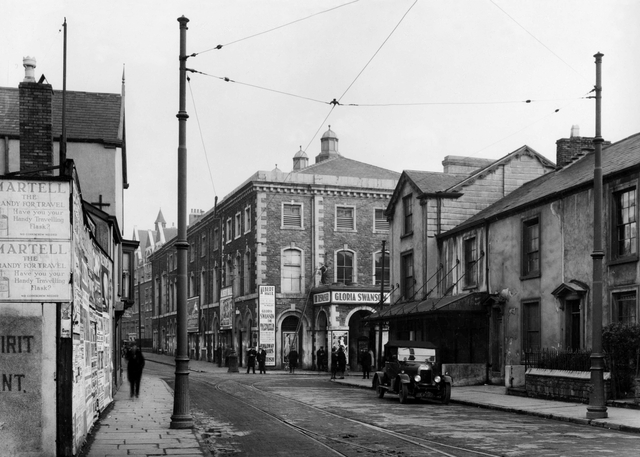 Just off the Kingsway in Swansea city centre, this is a very imposing building on Cradock Street. Facade is pretty much as it has always been. From what I remember going there as a child the interior was much like an old music hall with a very deep steep circle with two ‘arms’ reaching towards the screen / stage.

If my memory serves me correctly it showed its final movie in about the early-1980’s. I remember queuing to see the Welsh premier of “Jaws” for four hours here. On my next visit I’m going to ask if I can see inside and take a few photos.

The Mecca Bingo Club operation at the Albert Hall Cinema closed in March 2007.

The Albert Hall (Swansea) and the Plaza (Cardiff) were the two flagship cinemas of the Jackson Withers circuit. Whilst I worked in the Warner Pathe Vaults, the company always made a point of repair shop checking any print that was to go to these cinemas.
As far as the Withers projectionists were concerned, you had reached the top flight of the local projectionists ladder if you could secure a position at the Albert. The Albert being considered far more projectionist friendly than the strictly run Plaza under the managership of Dai John.

THe building is slowly starting to look in a very sad state.
Plaster work is coming of the main front at pavement level and trees are growing at the higher levels. Also, there are barricades along the side of the building to prevent passersby being hit by falling bricks.

Anyone have any news on the future of this stunning building?

My fight to bring the Albert Hall back o the people of Swansea has begun.
Any help anyone can offer in the long trek ahead will be very welcome.

Is the Albert’s projection box, complete with projectors, still intact? In the early 1960s it was regarded by Withers projectionists as being the best positioned box South Wales.

Have there been any attempts to make the Albert a listed building?

Here is a website i have opened up to start a campaign going to get the glorious Albert Hall reopen again. Any feedback would be appreciated and used. I need as much info as possible. http://www.spanglefish.com/swanseasalberthallreborn/index.asp?pageid=349183

March 2012 picture. The disintegration of the rendering is revealing the original stone façade