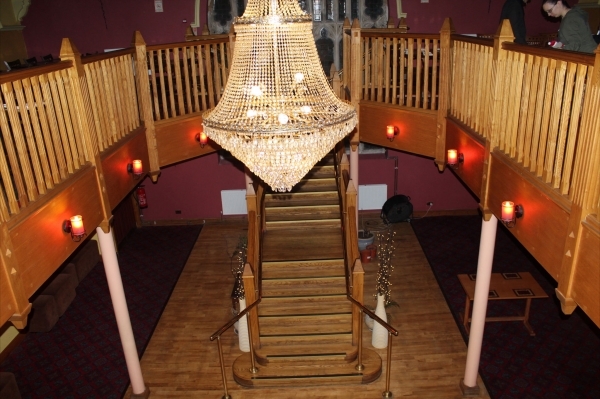 This cinema ‘complex’ was converted from St. Paul’s Church in Swansea city centre. The main screen was in the main part of the church, the second around the back. Best of all was screen 3…. in the former crypt underneath the building!

I remember seeing a double bill of “The Exorcist” and “Friday the 13th” in the crypt screen with a friend of mine and then on leaving had to walk through what was part of the old graveyard. We walked at a brisk pace! One of the screens (I think screen 2?) used telescopic projection which I think was a first for a cinema in Swansea. The cinema was run by a guy who did the whole set up as a hobby, I believe. The whole place just glowed D.I.Y. The Studios 1-2-3 was closed in August 1989. It became an Indian restaurant, which had closed by 2014.

Lyn Thomas was son of Harry Thomas who built and ran the TIVOLI Cinemma at Gowerton near Swansea. This burnt down during WWII and was rebuilt and opened by Lyn Thomas in the early 1950’s. He also ran the ELECTRA Cinema Gorseinon, and the TIVOLI Cinema pontardulais and I think the Price of Wales Cinema Glyn Neath. The church conversion was very well done but VERY DIY! The crypt screen was projected from a box at the rear of the church at ground floor level via an inverted periscope ( again home made) The 3rd screen projected across the alter area of the church via a projector that was just left to run. Fingers crossed the flim did not snap! Projectors in the main box were set up on steel file cabinets laid on their side to get the beam above people’s heads. A lash up but it worked!
Richard Havard

Thanks Richard. Yea that sounds like the stories i heard of the operation at the Studio. I cant believe it actually stayed open as long as it did, i remember sitting in all 3 screens on many occasions as the only patron!! At that time Swansea had 3 major,large cinemas open which proberbly explains why the Studios were always empty. I know that some of the seats came from the Albert Hall and The Carlton (i loved The Albert Hall-huge old fashioned picture house!)

Studios 1.2.3.
St Helens Road, Swansea, South Wales.
This unique operation was not run as a hobby but was a professional cinema run by D. Lyn Thomas, son of Harry Thomas who had built and ran the ‘Tivoli’ Cinema in Gowerton near Swansea which burnt down during World War II. It was rebuilt and then reopened in the early 1950’s by his son, Lyn. Harry Thomas also ran the ‘Electra’ Cinema, Gorseinon, ‘Tivoli’ Cinema, Pontardulais. ‘Tivoli’ Cinema, Mumbles.
D. Lyn Thomas also ran various valley cinemas during the late 1960’s/1970’s. ‘New Theatre’ Glyn Neath (former ‘Miner’s Welfare Hall’) – The ‘New Theatre’ Glyn Neath – was destroyed by fire, Friday night 1st May 1970. The ‘New Theatre’ West End Terrace, Ebbw Vale – Manager the late Gerald Hazel. This venuamilye was later renamed:– ‘Greneda’ – (former ‘Workmen’s Hall’). After the loss of Glyn Neath Lyn Thomas then ran the Ebbw Vale venue. He also ran the ‘Studio’ Cinema Abertillery (in a former library) and the ‘Scala’ Cinema – Osborne Road, Pontypool. After the closure of Ebbw Vale D. Lyn Thomas and his family moved back to Swansea.
The cinema known as ‘Studios 1.2.3.’ St. Helen’s Road, Swansea were located in a converted church near Swansea city centre. The building was originally St. Paul’s Church and the Studio Cinema opened in 1977. Initially it had a total of 2 screens seating:– Screen 1- Screen 2 – Screen 3 which was added later. Total seating capacity:– 484.

Screen 1. was in the main body of the former church. Screen 2. was located in the former crypt underneath the building! This screen used a ‘home made’ system of ‘Periscope Projection’ which utilised mirrors taken from the owners mother’s dressing table. Screen 3. was located behind Screen 1 – in the area formerly occupied by the altar. All the projection for Screens 1 & 2 was from an operating box, located at the rear of the church at ground floor level. The Kalee 12. & Kalee 19. 35mm projectors in the main operating box were mounted on steel filing cabinets – laid on their side – to enabled the projection beam above people’s heads. Screen 3 trusted to luck. Once the projector had been started it was left mainly to run on its own except when a ‘changeover’ was required. The seats, and other fixtures and fittings, for ‘Studio 1.2.3’ Cinemas came from other former Swansea cinemas:– ‘Albert Hall’ and ‘Carlton’. ‘Studio 1.2.3. Cinemas’ closed their doors, for the last time, August 1989. 1994 the building was derelict and ‘For Sale’ and is now an Indian restaurant.

Shot of the Studio Cinemas as it is now, ann Indian restaurant. Studios 1 and 2 were reached by the steps seen here and Studio 3 was around the back (see next photo)
http://www.flickr.com/photos/curtians/2220988653/

A lot of theatres become churchs first I have seen a Church become a theatre.

The Ucheldre Theatre/Cinema in Holyhead North Wales, is also a former church, and is currently open.

Yay! I also saw that Exorcist/Friday 13th double bill in screen 3, with two car speakers mounted on the walls for the sound. I seem to remember this set up was advertised as ‘Studio Stereo’. As I worked at the nearby Odeon, I used to visit regularly. Most of the films shown in Screen 3 were of the more ‘exotic’ variety :)

Miah’s Restaurant is located in a former church building known as St Paul’s in the St Helens Road area of Swansea. Since its demise as a religiuos building it was used for several years as a cinema, before standing vacant for a decade or so. During this period the ravages of dry rot, dampness and building fabric degredation took a debilitating toil. However in 1998 its current owner realised the building’s potential as an exciting restaurant venue and, assisted by Micheal Batcup Architects began turning their dream into reality. Now restored the building provides a key landmark within the City’s fabric, and serves as a reminder to all that the sensitive rennovation need not be prohibited when saving structures of historical and architectural importance in Swansea.

Alas, Miah’s restaurant, like the cinema and chapel before it, is now closed and up for sale.

How well I remember the novelty of seeing the Joe Orton adaptation Prick Up Your Ears in Studio 1, distracted by the sound of running water from a faulty ballcock in the toilets situated on the right-hand side of the auditorium, and the hat of an elderly lady several rows in front as she nodded off, we wondering whether her hat might actually fall off on to the floor. O tempora, o mores!