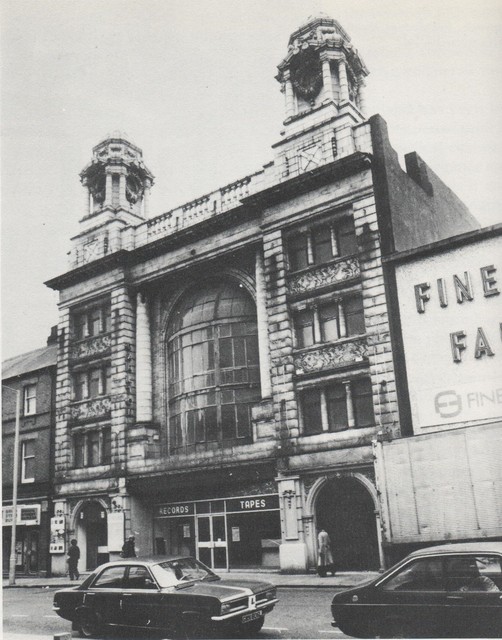 Situated on Swansea’s Oxford Sreet, next door to the now demolished Empire Theatre, the theatre opened as the Carlton Cinema de Luxe on 31st January 1914. The Carlton Cinema has a very beautiful facade with bay glass windows on the first and second floors. There are decorative freizes in Doultonware featuring dancing cherubs. Inside the foyer was a very ornate staircase. This leads to the Carlton cafe which was a very popular meeting place in its heyday. The facade has now been cleaned up and looks very impressive. All this is a shame now being that everything behind the stairwell has been demolished.

The Carlton Cinema was closed by the Rank Organisation on 29th October 1977 and was converted into retail use as a record store. Later the auditorium was demolished and replaced by a large bookstore (Waterstone’s). During this time the building had been Listed Grade II and the retained facade still has this status.

The opening of the bookstore saw the stairwell opened up to access the second floor shop, the first time the area had been seen since the 1950’s. During its last 10-15 years, the cinema was accessed by a narrow corridor with a small box office at the street then a kiosk halfway down. The circle area was unused for many years before the closure.

The stunning balcony looking over the cafe.
http://www.flickr.com/photos/curtians/2220182953/

Distant shot up Oxford Street. The bland 60s building is where the once gorgeous Swansea Empire theatre stood until 1957
View link