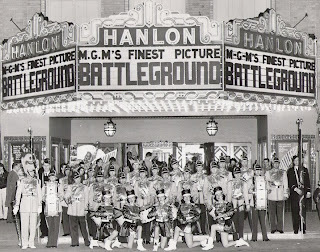 The Virginia Theatre was constructed in 1920. After acquisition by the Fox West Coast chain in 1929, the theater was renamed in honor of its founder, Peter Hanlon. A devastating fire in 1954 ended operation as a movie house. In its final years, the theater was used as a furniture warehouse before it was demolished in June 1974.

Here is an excerpt from a June 1974 newspaper article on the demolition:

A Vallejo landmark that served as the community’s leading cinema for nearly 35 years until it was heavily damaged by fire 20 years ago is being torn down to prevent it from becoming a derelict structure. It’s the old Hanlon Theater at 414 Virginia St. where wrecking crews began demolition of the 51-year-oki building early last week under a permit granted Senator Luther E. Gibson, who acquired the building in 1952.

Senator Gibson said it is with regret that the two story structure which once served as Vallejoâ€™s major entertainment center and the cityâ€™s only movie palace is coming to an ignominious end. “Many Vallejoans thought the theater might be restored to its former grandeur after it was ravaged by fire or that it could be converted to some other commercial use”, Senator Gibson said, “but the economic facts of the situation are that such re-construction is not practical”.

Minerva Burr, mother of actor Raymond Burr, was the organist at this theater for many years.

Here is a newspaper photo from the article about the demolition in June 1974. The poor quality is from the original.
http://tinyurl.com/dhkhwn

From 1927 a photo postcard view of the Virginia Theatre in Vallejo.

The May, 1934, issue of The Architect & Engineer had an item about a theater project in Alameda then being designed by architect F. Frederic Amandes, and it ended with this line: “Mr. Amandes has also made plans for extensive alterations to the Fox-Virginia theater in Vallejo.”

When my father was a young boy he would wait for Mrs. Burr to finish her shift playing the organ so they could walk up the hill for his piano lessons and then he and Raymond would play. My grandparents and parents stayed friends with Raymond long after he left Vallejo.