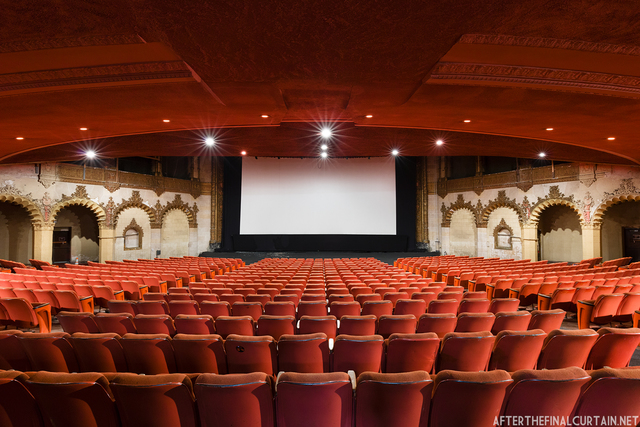 The Warner Bros. Hollywood Theatre opened April 26, 1928, with Conrad Nagel and Dolores Costello in “Glorious Betsy”. The theatre was built within an office building and the auditorium is located on a diagonal axis facing north-east at the rear There was a second entrance to the west of the theatre on Wilcox Street. Other movie palaces built in Los Angeles designed by G. Albert Lansburgh included the current downtown Orpheum Theatre (1926) and the Wiltern Theatre.

This opulent movie palace was as close to an Atmospheric style theatre as Los Angeles ever had. It was built in a semi-Atmospheric style without the twinkling stars and clouds. A colonnade of wide Italianite style arches on the auditorium side walls contained painted scenes of exotic landscapes on the walls between the arches, giving a sense of being in an open garden. The original painted asbestos safety curtain by famous artist John B. Smeraldi had ‘a fanciful scene of birds of paradise performing a mating dance in a forest of delicate trees and blossoms, painted over gold leaf’. Design styles included Renaissance Revival, Rococo, and Moorish. The theatre had a seating capacity of 2,756 in orchestra and balcony. A 4 manual, 28 rank Marr & Colton organ was relocated here from the Piccadilly Theatre in New York, where Warner Bros. premiered “The Jazz Singer”. The two ‘dirigible’ radio masts on top of the theatres office building were added soon after the Warner Hollywood Theatre opened. The office space on the upper left of the building had become the radio studios for KFWB and these were illuminated with letters pronouncing the theatre’s name and the radio station code name letters.

In the 1940’s, Carol Burnett worked as a Warner usher and she now has her own star on the Hollywood Walk of Fame right outside the theatre.

During the 80 week run of “2001, A Space Odyssey” in 70mm, which had its West Coast premiere here on April 4, 1968, the theatre changed hands from Stanley Warner to Pacific Theatres and was renamed the Hollywood Pacific Theatre.

“A Clockwork Orange” (1972) also was among movies that had a very successful run. On 31st January 1978, after a run of Clint Eastwood in “The Gauntlet”, the Pacific Theatre closed. It was converted into a triple-screen theatre with 1,250 seats in the former orchestra level and two 550 seat screens in the former balcony. The main screen and screen 3 in the balcony were both equipped to play 70mm film. It re-opened later on May 26, 1978. The awesome original decorations in the semi-circular lobby was not disturbed.

There are two main reasons for the Pacific Theatre’s eventual closure, the disruption due to the Metro subway construction along Hollywood Boulevard and on January 17, 1994 when the theatre suffered damage due to the Northridge Earthquake. This caused the two balcony screens to be closed due to concern over public safety. The Pacific Theatre closed on August 15, 1994. It remained shuttered and unused until 2002 when the main floor auditorium was used by the Entertainment Technology Center as a testing facility for the new digital projection revolution. They had departed from the building by 2006 and in early-2008, it was being used by a church on Sundays. The balcony areas are still inaccessible to the attendees. The church vacated the building in June 2013.

The theatre has been designated a Historic-Cultural Monument. With the redevelopment of Hollywood Boulevard underway, the theatre has now been highlighted in the evenings by new illumination on the radio masts on top of the building. Perhaps soon, this grand old theatre’s time has come to rise again.

Yesterday’s LA Curbed article about the Warner with photos.

Just in time for the big anniversary, here’s a new retrospective article on Kubrick’s “2001: A Space Odyssey.” The Warner Hollywood/Hollywood Pacific and lots of other cinemas get mentioned in the piece.

Still the Ultimate Trip: Remembering “2001: A Space Odyssey” on its 50th Anniversary

2018 link with a miniature diorama including the Warners.

this theater reminds me of the Alexandria in San Francisco. another movie palace boarded up and just sitting there.

This reopened as the Hollywood Pacific Triplex on May 26th, 1978. Grand opening ad posted.

as I aske din July is this theater still boarded up and just sitting there?

Originally the two radio towers supported a horizontal wire antenna which was strung between them. The transmitter moved away in 1950.

The KFWB call letters were for “Five Warner Brothers”.