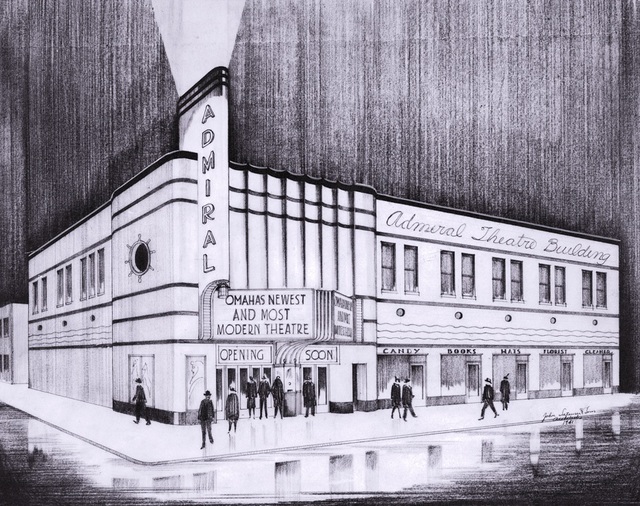 The Admiral Teater sat at the corner of South 40th Street and Farnam Street in Omaha, Nebraska. It was originally a single screen house when it opened in 1942. Later it was twinned.

The inside was an odd style of architecture. It was designed to look and feel like a boat, with an Art Moderne style.

This theater was demolished in the mid-1990’s.

you are right Lost Memory, The Admiral was indeed on the northwest corner of So. 40th and Farnam. I used to see Rocky Horror there shortly before it closed.

Yes, 40th and Farnam is the correct location. Officially, the address was 142 Farnam St. The Admiral was on the northwest corner. It opened February 4, 1942 as a 1000-seat, single-screen movie house in what was then a wealthy “suburb” of Omaha. As suggested by the name of the theater, the theme of its decor was nautical. There were ocean-wave murals on the walls of the auditorium. Uniforms worn by staff were inspired by Navy uniforms. A champagne bottle was supposed to have been smashed to “launch” the new theater, but the plans were scratched for safety reasons when opening night crowds proved larger than anticipated. From the 1940s through the early 1970s, the theater did well, hosting second-run films at first, then first-runs and local premieres. Like many older single-screen theaters, it fell out of favor in the mid-1970s as the public chose to see movies at the newer multiplexes. As beardbear31 remembers, it was the home base for Omaha’s rowdy, toast-throwing “Rocky Horror Picture Show” fans from the late 1970s into the early 1980s. In 1979, the Admiral was remodeled into a twin-screen theater. In 1983, it closed again for remodeling but never reopened. Plans for the site fell through one by one. Meanwhile, the building’s condition deteriorated until it was no longer practical to save it for any purpose. Neighborhood merchants raised the money for its demolition, which finally happened in early 1997. An office building now occupies the site.

The really grand conceit of the Admiral was that the decor amounted to a ship turned inside out. The sidewall were white and hull-like to a height of about twelve feet, then a railing, then lifeboats hanging inward. The night sky was the background and house right near the proscenium there was a full moon with clouds constantly passing by.

This was a great place to divert one’s gaze when things got too scary on screen.

There was a “crying room house left at the rear.

Also the drinking fountain in the lobby was activated by an electric eyeâ€"both mysterious and high tech in the 50’s.

The February 27, 1943, issue of Boxoffice has photos of the Admiral Theatre. The house got its nautical Moderne design courtesy of Omaha architect Frank Latenser.

My fondest memory of this theater, other than all of the great horror and B-movies I saw there in the 70’s and early 80’s like “Dawn of the Dead”, was the bathroom. Remember those stairs?? When I was 11, having to go down there to pee was usually scarier than anything I came to see on the screen.

If memory serves, during it’s later days in the early 1980s, it screened “Popeye” for some forty weeks. Can someone check the newspaper microfiche?