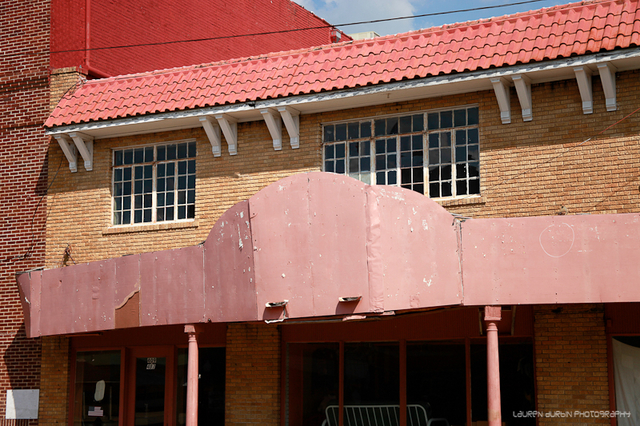 Built on the site of the Airdome, which had opened on May 1, 1915. The Liberty Theater was opened on December 12, 1918. In 1921, the theatre was reversed and expanded. It’s auditorium was destroyed by a fire in October 1979. The entrance and lobby remain, and have been in retail use.

This is from Boxoffice magazine, January 1960:

HEAVENER, OKLA.-Paul Maxwell has taken over operation of the Liberty Theater on a lease from Ray Hughes, who along with his late father G.D. Hughes have provided motion picture entertainment here for 41 years.

Hughes turned the theater over to Maxwell January 3, the same day he closed his drive-in at nearby Poteau, and he and his wife left to spend the winter in Florida. The change at the Liberty was announced in the Heavener Ledger, which included a picture of the old Airdrome Theater in 1918 when it was purchased by G.D. Hughes from Dave Jackson. Later the Liberty was built on the site.

the Heavener Ledger, August 5 1920, saysm the trial for the murder of Adam Wilkins Choctaw Indian Policeman was held in the Liberty Theatre Building through the profferment of Chamber of Commerce Manager Hughes because it was the largest in the city “but scores of people were turned away some time before the opening as the house was crowded to the doors"I think the seating capacity at that time was 300 .

The June 9, 1958, issue of Boxoffice reported that the Liberty Theatre at Heavener had been closed for remodeling on May 10, reopening on May 21 for an 11-day run of “The Ten Commandments.”

The roots of this venue date back to 1915 when the Jackson Brothers launched the Airdome Theatre in downtown Heavener. The Airdome had a Powers 6-A projector launching May 1, 1915 with Mary Pickford in “White Roses,” Sidney Drew in “Who Was Who in Hogg’s Hollow” and Herbert Prior in “Dick Potter’s Wife.” G.D. Hughes bought the Airdome and converted it to the Liberty Theatre on December 12, 1918. In 1921, the theatre was reversed and expanded. It added sound and during the Depression ran a “Bank Holiday Show” during the banking holiday in 1934 where people could pay whatever admission they could afford.

Hughes upgraded to new projection in 1939 and RCA sound in 1945. But the 41 year streak of the Hughes ended when they sold the theatre to Paul Maxwell on December 31, 1959. But the Maxwell’s run lasted less than a year and the Hughes family was back in 1960.