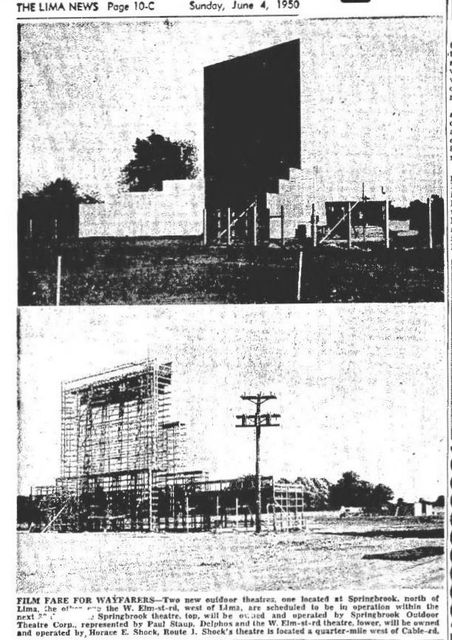 The Springbrook Auto Movie opened on July 6, 1950, featuring the 1948 western “Whispering Smith” with Alan Ladd, Brenda Marshall and Robert Preston. It was built at a cost of $100,000 by Paul F. Staup and ‘Cleveland interests’. Staup also owned and operated the Staup Auto Movie Theatre in Delphos, OH. Sam Fitzsimmons was to be the theatre manager. It had a capacity of 700 cars with in-a-car speakers. In 1951, the theatre operator was Car H. Schwyn Theatres from Bowling Green, OH. In 1955 it was operated by the Jack Armstrong Circuit from Bowling Green who bought out Schwyn Theatres. In 1953, new equipment to screen 3-D pictures was installed. In May of 1954, a new 100ft x 50ft screen was installed for the screening of Cinema-Scope pictures.

In 1957, Selected Theatres Inc. from Cleveland, OH. took over the operation of the Springbrook Drive-In. They were already operating Horace Shocks Lima Drive-In, Gloria Drive-In and Sharon Drive-In theatres at this time. Also in 1957, Co-Operative Theatres of Ohio will be the buying and booking agency until closing of all the drive-in theatres in Lima, OH. The Springbrook Drive-In ran typical drive-in fare in the 1950’s and 1960’s. Then into the late-1960’s they started running R and X rated movies and got into trouble at times. On September 18, 1969, the theatre got raided for running the eight minute trailer for the movie “Starlet” by the Allen County Prosecutor. He was getting complaints about it. The prosecutor made them screen it, and after that they arrested Robert Boyd, the theatre manager. He was charged with ‘exhibiting an obscene’ motion picture film. He posted bond and was released. He was scheduled to appear in court. The Springbrook Drive-In finally closed in 1988. It was sold and demolished, and the site is now condominiums.

Here is a November 1963 ad from the Lima News:
http://tinyurl.com/yeppqdo

July 6th, 1950 grand opening ad is now in the photo section for this drive-in.