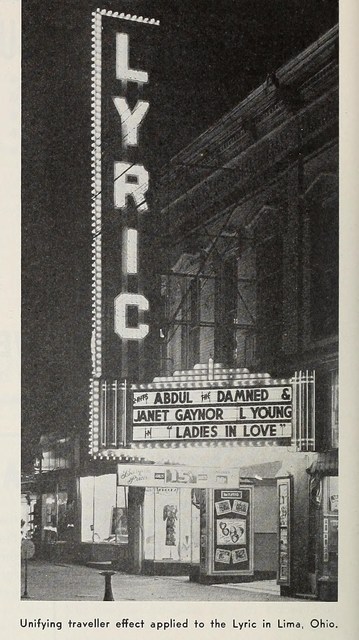 The Lyric Theater was opened on February 6, 1911. It was remodeled in September 1927. It was later renamed Ranger Theater. The Ranger Theater closed in 1967 as a result of redevelopment in downtown Lima.

In 1963, the Ranger was operated by Settos Theaters of Indianapolis, George Settos owner. Other Settos theaters were the Knox and Ohio in Louisville, KY and the Ohio in Indianapolis.

You are Right ken mc.

This comment by Bill Dakota on a retailing history web site says that the Ranger Theatre had once been called the Lyric Theatre. The house was located on Main Street between High and North Streets.

The October, 1915, issue of house organ Bell Telephone News mentions a Lyric Theatre in Lima. I’ve found the house mentioned in connection with George Settos in 1922 and in 1929. In the 1930s, the Lyric was the site of several professional boxing matches which are noted at the web site BoxRec.

I found a single reference to a stage production being mounted at the Lyric in 1946, so the name change took place between then and 1950, when the ad for the Ranger that kencmcintyre linked to earlier was published.

The Septemer 2, 1911, issue of The Billboard reported that the Lyric Theatre in Lima, Ohio, would open on September 4. The house was to be booked by the Sullivan & Considine vaudeville circuit.

The September 23, 1927, issue of The Film Daily ran a brief item about the remodeling of this house when it was called the Lyric:

“Remodeling Lima Lyric Lima, O. — Remodeling and improvements costing $50,000 on the Lyric will be started in November, with seating capacity increased to 1,000. The house is owned by the Lima Amusement Co.”

April 8th, 1948 opening ad as Ranger can now be found in the photo section for this cinema.