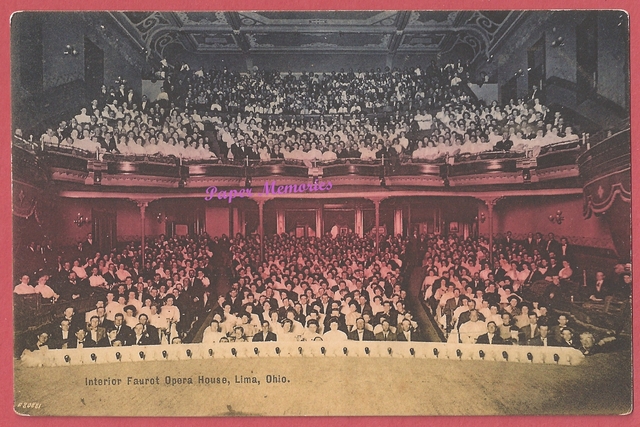 The Faurot Opera House in Lima is listed in the 1897-98 Julius Cahn Official Theatrical Guide, an annual for roadshow managers. The theatre is listed as having 1,200 seats, was on the ground floor, had a proscenium opening of 31 feet wide X 35 feet high, with a stage 40 feet deep. There was both gas and electric illumination and the house orchestra had 9 members. Lima’s newspapers were the Gazette and the Times. Local hotels for show folk were the Faurot House, Lima, French House, Burnett, Harrod and Hoffman. The theatre manager was H.G. Hyde. Lima’s population in 1897 was 25,000.

The S. S. Kresge Co. announced Wednesday that the 70-year-old Faurot building will be razed in 1953 to make way for a new building to house Kresge’s Lima outlet. John S. Hollister, real estate representative for the firm, said, “Things are not definite as yet, but Lima should have an imposing structure at Main and High Streets next year.” He said the proposed new building is definitely on the company’s schedule for 1953. Kresge leased the familiar landmark in 1946 and announced plans to raze the old four-story opera house. Hollister said that shortages of materials and later the freeze on commercial building have delayed construction plans until now.

Tenants of the Faurot building have received notice to vacate by Dec. 31. Hollister said that razing of the building should start shortly after the first of the year. In 1946 company plans called for a $500,000, air-conditioned, two story building. Plans have been revised, but not materially, Hollister indicated.

Kresge negotiated a 25-year lease in 1946 with the Maire Bros, owners of the building. Two 10 year renewal options were signed at the time of the lease. The Faurot opera house, once the largest between New York and Chicago, was built by Benjamin C. Faurot in 1882. It was one of the finest in the Midwest. Faurot sold the building a few years later when he entered the railroad business. The Maire Bros. purchased the building from John D. Rockefeller in 1902.

At one time opera patrons from all over Ohio came to Lima. It was the only stop between Pittsburgh and Chicago for traveling opera companies. The elaborate theatre was the scene of legitimate shows, vaudeville and movies until June 1934, when it closed permanently. Later Warner Bros. Inc., leased the theatre portion of the building as a storeroom, but that lease expired prior to 1946.

The Faurot Opera House’s architect was Oscar Cobb of Chicago, already notable for his theater work in the Midwest.

Tinseltoes: I’ve found that the Lyric Theatre was an earlier name for the house listed at Cinema Treasures as the Ranger Theatre. I’ve reported the missing AKA in a comment on the Ranger’s page.