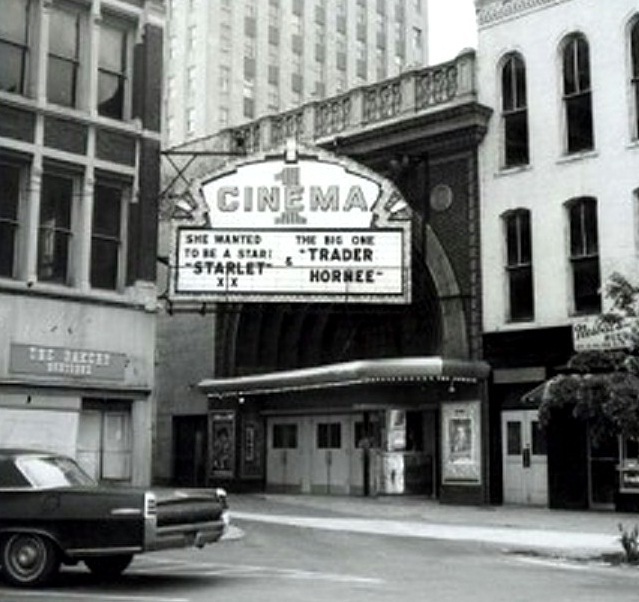 The Empire Theater opened on March 18, 1911 in a conversion of a plumbing & heating store in the Collins Building. It was closed on May 15, 1919 and was gutted and remodeled to reopen as the enlarged and re-named Sigma Theater in 1920. By 1941 it was operated by Warner Bros. Circuit Management Corp. It was badly damaged by a fire on March 1, 1949. In 1972, it had been closed for over ten years when William Dakota decided to reopen it as Cinema 1. The theater had been stripped of seats, projectors and screen. Restrooms were intact, and Dakota bought 325 used, self rising seats from W.S. Butterfield Theatres' Regent Theater in Flint, MI, that had closed and was to be demolished. He bought two used 35mm Simplex projectors from a collector and renovated the marquee with the new name Cinema 1.

He later sold the theater to Harold Mahoney of Durand, MI, who exhibited hardcore X-Rated films. Court action in the late-1970’s closed the theater and in 1981 the whole interior was stripped, with offices built inside. Around that time, the Ohio Theater, two blocks away also closed, as did the Quilna Theater and Ranger Theater, leaving downtown Lima with no operating movie theaters.

It says “Newly Remodeled and Embellished”. They must have done some work on the theater at that time. Here is an April 1967 ad from the Lima News:
http://tinyurl.com/6mfmca

This house opened in 1911 as the Empire Theatre. The April issue of Motography ran this notice:

“The Empire theater, Lima’s new moving picture house, was recently opened to the public by Messrs. H. B. Hoffman and H. B. Spencer. The decorations and equipment are elaborate in every detail and have been installed without regard to expense. There is a seating capacity of 300, fitted with opera chairs, and the floor inclines sufficiently to provide a clear view from any point in the house. On the opening night all patrons were presented with a bouquet of flowers.”

This 2011 article from limaohio.com (with two photos) says that the theater was enlarged and renamed the Sigma in late 1919-early 1920. It had another remodeling in 1931, and was was closed for a full year after the 1949 fire, reopening on March 1, 1950. The article doesn’t mention the theater closing in the 1960s, but only that it “fell on harder times” during that decade and operated as a second-run house. In its last years as the Cinema 1, adult films were shown. The conversion to office space took place in 1981.

The Empire launched as a motion picture theatre on March 18, 1911 in the existing Collins Building which had recently housed a plumbing and heating store. It closed and was gutted for a refresh on May 15, 1919. It relaunched as the Sigma in 1920. 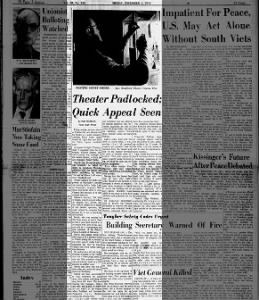