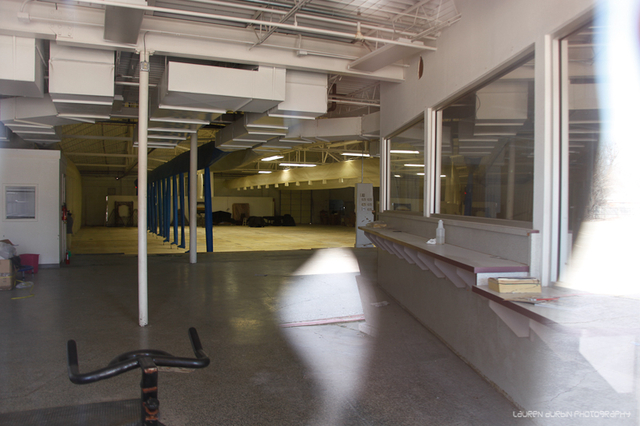 Whomever it was that decorated the M-M Mini Cinema performed a marvellous job in using smokey tones and exotic color to create a mystic ambience. It was renamed Mini Mall Theatre in 1975 and closed in 1977.

Actual physical address for the M&M Cinema would have been 2629 W. Britton Rd.

Occasionally Google Maps seems to be off the mark. In this case the old M & M Mini Cinema can be seen a little West of the arrow. It was located on the corner of W. Britton Rd. and Britton Cr. behind that long shopping center with the white roof, between the cul-de-sac housing development and apartment complex.
I know the M & M was a popular place to go watch a good vintage movie, and think it was open up to 1983.

Seen on this web page are modern photos of the former M&M Mini Cinemas,
An idea that was a little ahead of its time!
http://www.roadsideoklahoma.com/node/530

The M&M Cinema concession stand was a gold mine since its counter also served the mall promenade.

The Adair Mini-Mall opened on June 1, 1971 with Adair’s Cafeteria being the operator and star attraction. But in the exterior of the center was a theater that projected 16mm repertory fare along with contemporary features. It opened as the M-M Cinema with the initials standing for “Mini-Mall” Cinema (it was not the M “&”M”). In 1975, the cinema was renamed as the Mini Mall Theatre to perhaps make it clearer what M-M stood for. That was its name to closure in 1977 when the “Adair’s” was dropped from the Mini-Mall when Adair’s Cafeteria moved to new digs.

But the theater wasn’t through quite yet. Bob Hammack and Kim Kueteman reopened the theatre as the Bijou Classic Cinema in the Mini-Mall in July of 1978 which started with an all rep policy. When folks weren’t coming, it changed to mainstream films with repertory at midnight as the Bijou Cinema. People didn’t like that either. So the Bijou Cinema closed in 1979 with Hammack and Kueteman citing low attendance and with the pair moving all future screenings to the Grover Cleveland Arts Institute beginning in October of 1979.