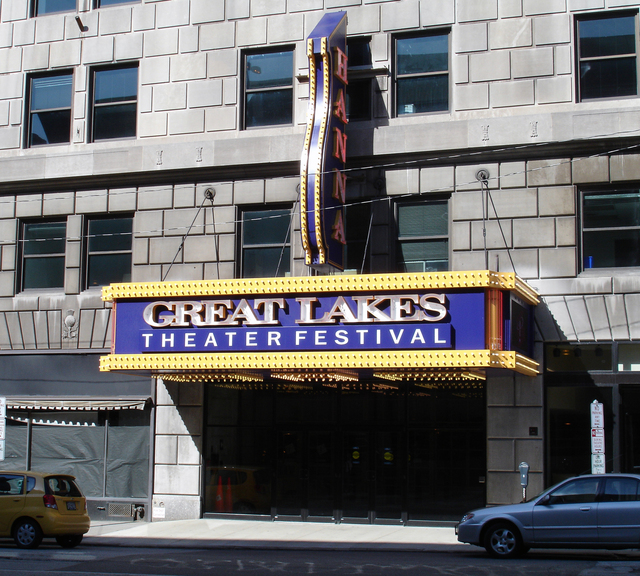 The Hanna Theatre was designed by architect Charles A. Platt as part of the Hanna Office Building, named for the prominent Cleveland Senator Mark Hanna. It opened on March 28, 1921. The auditorium had 1535 seats in the orchestra and balcony and Pompeian-style decor, with a polychrome coffered ceiling. It operated as a legitimate house handling the touring Broadway shows from the time it opened until the touring shows went into the restored Palace and State theatres across the street. It closed in 1988.

It was reopened shortly after by Morrie Zryl/Atlas Cinemas, running movies for a few years, bringing movies back to Playhouse Square after nearly 20 years.

I remember the Hanna in the 1950s when I lived in Cleveland. The theater presented Browdway tours during the fall – spring season and ran various film festivals in the summer. I remember one year they did foreign films and the next year they did silent films with live piano.

According to the book “Guide to Cleveland Architecture” the Hanna was built by the Shubert Syndicate for its road show circuit. It is long and narrow with Corinthian capped pilasters, fresco paintings and coffered ceilings.

Can anyone confirm that the play “A Night in Spain”, which featured Ted Healy and Larry Fine, played there in April 1928, or that Joe Besser was in “If the Shoe Fits” from Nov 11 to Nov 17, 1946?
The Three Stooges Fan Club is trying to document all their personal appearances. Visit the Museum’s website www.stoogeum.com
Thanks,
Frank Reighter

A book entitled “Cleveland’s Playhouse Square” by Patricia M. Mote chronicles in words and photographs the Loew’s State & Ohio, RKO Allen & Palace and Hanna theaters from their opening in the 1920s through 2006. It can be found in the Local Interest section of Cleveland area bookstores, and for those not in the area it can be ordered from the publisher at the following website:
View link

You’ll be able to watch the next show that plays the Hanna Theatre while enjoying a pint of ale atop a barstool or sprawling in a lounge chair with a table of friends.

If you’re looking for a cozier experience when the new, radically made-over Hanna reopens — which could be as early as next fall — you could cuddle a significant other on a comfy banquette.

Perhaps it’s a business event, so you’ll book club seats, or a private box with its own restroom, thanks to a $19.2 million project that is already 75 percent paid for.

Or maybe you just want regular theater seats, none of which will be more than 11 rows from the thrust stage, putting you in the same room with the dueling actors.

Those actors might pop up out of some netherworld thanks to a hydraulic system that can independently raise and lower the three sections of the stage within seconds.

Or maybe they’ll descend from the heavens, suspended from a newly invented, computer-controlled mechanical “fly” system high over the stage.

All this is part of a project to transform Playhouse Square’s historic Hanna into a performance space unlike any other in the country, a new home for Great Lakes Theater Festival.

On Friday, Great Lakes, Playhouse Square and the architecture firm Westlake Reed Leskosky will unveil the details of their renovation of the 1921 theater, which has already been gutted of all but the neoclassical plasterwork that will be restored to its original luster.

At Friday’s news conference at the Hanna, Great Lakes is expected to announce it has already raised approximately $14.5 million in the “quiet phase” of its Re-Imagine a Classic campaign, according to documents obtained in the advance by The Plain Dealer.

Even before the campaign goes public today, the theater has collected nearly enough money to pay for the $14.7 million renovation of the theater, which has played host to Noel Coward and Henry Fonda, and introduced several generations of Clevelanders to Broadway.

The remaining $4.5 million in the campaign will go toward establishing an endowment and an operational support fund to ensure financial stability for Great Lakes, which reversed decades of economic woes only in the past two or three years.

The numbers don’t sound that impressive compared with the Cleveland Museum of Art’s current $258 million expansion and renovation project.

But it’s a big deal for Great Lakes, a professional nonprofit company that operates in difficult financial times with an annual budget of only $3.2 million.

“Raising that much that fast is a testament to Great Lakes and to its standing in the community,” said Thomas B. Schorgl, president of the Community Partnership for Arts and Culture and Cleveland’s de facto arts czar.

“They’ve gone about this with great vision, but also looking at practical issues. Contributors appreciate that kind of planning and collaboration going on between Great Lakes and Playhouse Square. This will have a great return on the investment by the community.”

The renovation of the Hanna will be the finishing touch on Playhouse Square, which has been called the single largest theater restoration project in the country, 27 years and $55 million (not counting the Hanna) in the making.

It’s the fifth and last of the theater district’s five 1920s theaters to be made over to form a performing arts center that now draws 1 million visitors a year and generates an estimated $46 million annually as a major engine in the ongoing revitalization of downtown Cleveland.

But architect Paul Westlake, whose firm has worked on more than 100 theater restorations around the country — including the first four at Playhouse Square — said he has never seen a theater like the new Hanna, which will seat 550 people in a space that originally held 1,400.

He credited Great Lakes producing artistic director Charles Fee and executive director Bob Taylor with having the vision to dream.

“Charlie Fee has been fearless, and we’ve built more models and redrawn more plans for this project than our firm has ever done,” said Westlake, whose practice is one of the nation’s leading theater restoration designers.

This creation has been a patient search, not an epiphany.

“The other theaters we’ve done are straight restorations, elegant old and old. This one has a dramatic contrast of the new and the old. We’re not using every square inch for seats. We’re trying to perfectly arrange 550 seats to make a completely different kind of environment.”

Among the minutiae included in the plans will be a remote refrigeration system for the in-theater bar, allowing the noisy parts that could disturb audiences to be put out of earshot in a newly excavated basement below the auditorium.

Fee delights in pointing out such details when showing visitors around the now-empty Hanna, but he says they’re all part of a bigger picture, for Great Lakes (which now operates in Playhouse Square’s 1,000-seat Ohio Theatre) and downtown Cleveland.

“As we’ve explored our options, we considered such things as moving to Chagrin Falls and building a barn theater, trying to move to University Circle or merging with the Cleveland Play House,” Fee said.

“But we’ve had a 25-year history of being in Playhouse Square, of being integral to downtown. We kept coming back to the idea of the Hanna, of being part of the next stage of downtown’s revitalization, and creating a theater experience like no other.”

Multiple ticket-price points for each performance, from as low as under $20 for lounge areas and up to $60 or more for premium seats.

A three-part hydraulic “thrust” stage that juts out into the auditorium and that can lower to create a “traditional” proscenium (or picture-frame) stage with a full orchestra pit.

In addition to a rejuvenated street-level entrance, there will be a door from the balcony level to an elevator lobby in the Hanna Annex building to allow patrons covered access to a parking garage — and access to the balcony for disabled patrons.

Registration with the U.S. Building Council’s Leadership in Energy and Environmental Design Green Building Rating System, in pursuit of a Silver rating, the third-highest rank.

I have great memories of the Theatre working concessions and tickets in the mid 80’s.
….How many times could I have seen “Brazil”?

From the late 1940s a postcard view of the Hanna Theatre along with the Allen and Loew’s State Theaters in Cleveland.

An article with pictures about the renovations being made to the Hanna to meet the needs of the Great Lakes Shakespeare Festival:

Architect Charles A. Platt first came to Cleveland on commission from William G Mather to design Mather’s lakefront home, Gwinn, in Bratenahl, 1912 and the Leader Building, 1913. As the story goes, Hanna hired Platt because Cleveland architect J Milton Dyer didn’t show up for a meeting.

Cleveland’s leading men had modest architectural ambitions compared to similar cities like Pittsburgh or Buffalo. Pittsburgh built grand institutions and monumental buildings and Buffalo hired the likes of Richardson, Sullivan and Wright. It’s telling, perhaps, that when Cleveland chose to bring in an important architect with a national practice it would be arch conservative Platt who would be valued for his admirable, business like practice and his ability to show up on time for meetings.