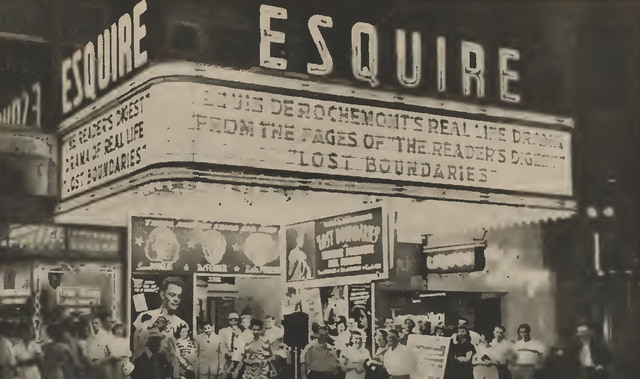 This was on the south side of Euclid Avenue just east of E. 17th Street. The Cinema Theatre was opened on October 14, 1928 with Richard Barthelmess in “The Patent Leather Kid”. It was equipped with a Wurlitzer organ. It was taken over by Warner Bros Circuit Management Inc. on November 18, 1930 and after an upgrade, reopened was Warner’s Lake Theatre on December 25, 1930. It had been equipped with a Western Electric sound system. It was listed as (Closed) in 1941 thru 1943. It was taken over by the Community Circuit Theatres and renamed Esquire Theatre and closed on May 28, 1951. It became the studios of WJW-TV Channel 8. I have a photo of it with the title “Hit Parade of 1952” on the marquee, plus another title I can’t make out.

After Channel 8 moved down by the Shoreway, the building became the Center Repertory Theatre in the late-1970’s and they moved out in 1980. It sat vacant for a while and was demolished in the mid-1980 with the site becoming a parking lot.

Wasnt the Esquire farther down Euclid by the Hippodrome? I thought it was around E.9th. I’m pretty sure it was across the street from the Hipp or close.

Ooops! I was thinking of the Embassy. I never knew there was another theater besides the Big Four in Playhouse Square. Wonder how big it was and when it closed? I dont remember newsp. ads for it in the 60’s.

According to my infallable records (he-he) the Esquire was originally the Lake. Have no records, but the Lake probably goes back to the twenties.
It was almost directly across Euclid Ave. from the RKO Palace. It closed (approximately) in 1950 (as the Esquire) and became the studios for WXEL-TV 9 (which later became (WJW-TV 8).
I was in there when it was a TV studio. They left the seats in place as well as the stage. The engineers who worked there told me it was quite a “rat trap” in it’s last days. Now it is a beautiful and scenic parking lot. (what else?).

Oh, I just found an old picture of the Lake. I’ll bet you’ve never seen this one before.
http://www.maxxmale.com/images/lake.jpg
A great shot looking down Euclid Ave. from Playhouse Sq. from sometime in the 30s.

Thanks for the pic. I’d never knew this theater existed!

Theatre opened as the Cinema in 1928. Shortly later Warner Brothers took it over and renamed it the Lake. It functioned as mainly a mover-over house from the Hippodrome for most of the 30’s and 40’s. In 1948 it was taken over by Community Theatres and, after a complete renovation, renamed the Esquire. It was operated for several years as the prime “art house” theatre downtown, but about the mid-fifties the exterior was completely remodeled and the entire building became a radio/tv studio. Last time I saw it (in 2000) it had become a parking lot.

The February 23, 1952, issue of Boxoffice lists the Esquire as one of two Cleveland theaters that had been converted to broadcasting studios. The other was the Metropolitan.

Grand opening ad from Christmas Day, 1930 as Lake is in the photo section.

According to Alan F. Dutka’s Historic Movie Theaters of Downtown Cleveland (and other sources), the Cinema/Lake/Esquire Theatre was at 1630 Euclid, across the street and a couple of doors east from the Palace Theatre. The Esquire closed on May 28, 1951.

But the Esquire’s conversion to a television studio in the 1950s did not mark the end of its career as a theater. In the late 1970s it was the home of the Center Repertory Theatre, a group which was a member of the LOTR (League of Resident Theatres.) Dutka says the television studio moved out in 1975 and the theater group occupied the house from 1978 into 1980, but a Facebook page for the theater group says it was there from 1974 into 1980.

This Facebook page has a lengthy reminiscence about the Center Repertory Theatre’s time in the house by one of its members, Tom Fulton. After the theater group folded the building sat empty and decaying for a number of years before being demolished in the mid-1980s for a parking lot.

Dutka notes that more recently the parking lot itself was obliterated for a southward extension of East 17th Street. Comparing current street view with vintage photos, it can be seen that the building once next door to the theater on the east is now occupied by the Bonfoey Gallery, and is now on the corner of the East 17th Street extension where the Esquire once stood.

Louis Israel of the Heights and Standard Theatre went “all in” on the Cinema Theater on Euclid. It launched on October 14, 1928 as a sub-run theatre with Richard Barthelmess in “The Patent Leather Kid.“ The large 1,000-seat theater featured a Wurlitzer organ and was bathed boldly in blue and gold. Israel had sold off the Heights and, just a year later sold, the Standard. The theatre was happily branded as “the best of the second run” films but stooped to exploitation fare as chain operated sound films took their toll on the Cinema.

Israel even booked the infamous, “Ingagi” banned for nature faking by censors in New York State and then by the Hays Office. Badly positioned technology-wise, the Cinema struggled into the Depression. Fortunately, Israel found a taker in the Warner Brothers Circuit which announced it would be closed for for “a fortnight” on November 18, 1930. The venue re-emerged as Warner’s Lake Theater on Christmas Day 1930 wiring it for Western Electric sound and positioned as a first-run house. The opening film was Otis Skinner starring in “Kismet.” When Warner took on the Hippodrome Theatre, the Lake was back where it started now as a discount, sub-run, double-feature house on November 21, 1933.

Community Theatres Circuit took on the venue changing its name to the Esquire. It shedded seats - now cushioned - in a redesign and opening with Dane Clark in “Moonrise.“ The streamlined 1948 renovation added turquoise and beige to the color pallet. But the Esquire failed to find its audience closing May 28, 1951 with Susan Hayward in “I Can Get It For You Wholesale.”

It became the studios of WJW-TV Channel 8 and was saved from demolition after the station departed serving as the live, Center Repertory Theatre after a costly refurbishing. But when they moved out in 1980, Playhouse Square took on the venue in 1981 but was unable to raise funding in excess of three million dollars to use the space. They sold off the theatre to a developer who demolished the building.