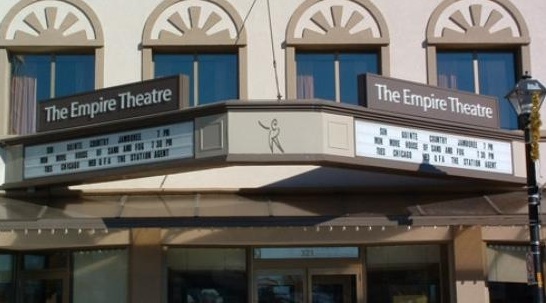 The building which houses the Empire Theatre originally opened its doors as the McCarthy Theatre in 1938 as a venue for both feature films and live performance. After 24 years of operation the McCarthy closed its doors in 1962 and would remain vacant until 1974 when it became Stephen Licence Ltd., a sports and hobby store.

While Stephen Licence owner Gerry Bongard did make some minor changes to the building he left most of the interior intact hoping that someday it would be returned to its original use.

In March of 2002, Royal Lepage ProAlliance broker/owner Mark Rashotte purchased the McCarthy building with a dream of bringing to Belleville a state of the art theatre for live performance and cinema. Rashotte, also a professional musician and recording artist, spent many years touring Canada and the Northeast United States performing in various theatrical venues. Over the years he developed a unique insight as to what a performing arts centre should provide to both the audience and entertainer.

The Building of the Dream:

In the fall of 2002, a highly skilled design and construction team began the task of transforming the McCarthy building into the new Empire Theatre and Centre for Performing Arts. With respect for building’s past and an eye to the future, the 700 seat Empire Theatre opened its doors in September 2003. The dream became a reality.

Listed as the MacCarthy Theatre in the 1943 edition of Film Daily Yearbook with a seating capacity of 829.

Just found this web site from “Pro AV” talking about all the technical improvements that were done!

Very helpful information for somebody wanting to do this to their favorite theatre!

I had a chance to look at the Empire theatre in Belleville a couple of days ago. What a beautiful job of restoring an old theatre. Its one of the coziest and most comfortable small theatres I have seen.
Also, the sound and lighting systems are recessed in the ceiling so the audience can focus on the stage. They still show movies occasionally too.
I hope someone will post a photograph of the interior on the theatre’s website.
Belleville is lucky to have such a community-minded owner.