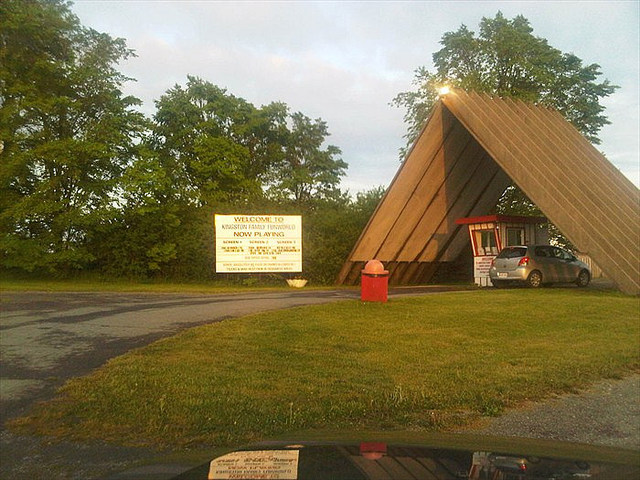 This drive-in has three screens. I don’t know when the other two were added to the original screen. It has some amusement park rides too and a go-kart track nowadays.

The address needs to be changed to 1533 McAdoo’s Lane, Kingston ON. 1533 McAdoo’s Lane maps out as running off Perth Rd just north of Hwy 401. North of the Hwy 401-Division St interchange (exit 617) the road name changes to Perth Rd. McAdoo’s Lane is 0.5 miles from the interchange.
The theatre is listed on their website currently as Kingston Family Funworld Park Drive In. According to their site it’s now three screens, plus other entertainment, including go-karts, mini putt, batting tent and amusement rides.

The current Kingston Family FunWorld drive-in is unrelated to whatever was the Kingston.

Kingston’s first drive-in was the Gardiners Road Drive-In, as shown in this photo from November 1948. I could easily believe it became known as the Kingston Drive-In. There’s a strip mall on the site now.

A Kingston This Week article said, “Kingston used to be home to two (drive-ins), the Mustang and the Kingston Drive-in, now a shopping mall.”

A 50th anniversary article in The Whig-Standard, they provided a lot of details about the old Mustang. It “was built in 1965 and opened the following year under the name 66 Drive-In.” Opening night was Aug. 26, 1966 (why so late in the season?) with a double bill of A Big Hand for the Little Lady and Never Too Late. “In 1967, the owner, Famous Players, sold it to Premier Theatres, which owned and operated the Mustang Drive-In chain”.

My Motion Picture Almanacs confirm that the two drive-ins operated in Kingston at the same time, although they overlooked the Mustang for a while.

Now I want to learn more about the actual Kingston Drive-In. Where was it? Was it the Gardiners Road? When did it close?

Also, according to Cinema Treasures, Bryan Adams' Summer of 69 music video was shot at the about-to-be-demolished Chilliwack Drive-In in British Columbia. Sure, he was born in Kingston, but the Chilliwack sign in the video is pretty hard to miss.