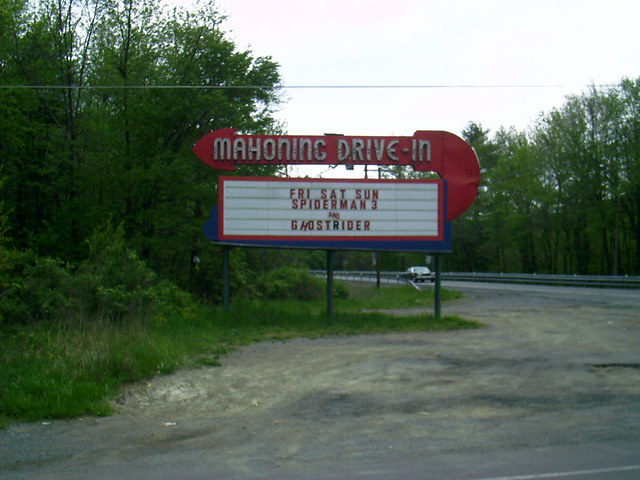 The Mahoning Drive-In was built in 1948 and opened at the beginning of the 1949 season with Jack Carson in “April Showers”. It was operated by James Humphries. By 1950 it was operated by the A.M. Ellis Theaters Co. chain. Initially it had a capacity for 500 cars, later increased to 600 cars. In recent years it was owned by Mike and Deb Danchak, who also owned the nearby Angel Theatre in Coaldale. New owners took over the Mahoning Drive-In in 2014.

Open May-September at weekends, it features the area’s largest screen, measuring 120ft wide. It features FM listening devices as well as room for 1,000 cars. The Mahoning Drive-In is ‘all retro’, featuring 35mm film prints of Classic movies. It also now offers camping on the grounds for an extra $10 per car load.

In July 2021, news was that the Mahoning Drive-In would be sold to the Greenskies Clean Energy LLC who planned to demolish the drive-in and build a solar farm on the site. A campaign was started to save the drive-in from demolition and Mahoning Township was to have a meeting on August 3, 2021 that might have denied this variance. However on July 15, 2021 Greenskies backed out of their purchase of the drive-in site and the owner of the property said they were willing to sell the site to the operators of the drive-in.

Why was it called Mahoning?

I can’t answer that. But the e-mail and phone number for the author of the above article are in the link.

davidcoppock, the drive-in is within Mahoning Township. The screen is less than 1200 feet from Mahoning Drive (AKA PA Route 902). The town of New Mahoning is about 2½ miles west of the drive-in, and the Mahoning Valley Speedway and Mahoning Valley Farmers Market are about a mile east.

Of those possibilities, I’m not sure which is the inspiration for the drive-in’s name.

Although the drive-in’s old web site (seen at Archive.org) claimed the Mahoning opened in 1948, that’s just wrong. The March 26, 1949 Billboard magazine said that Max Korr “in association with Mitchell Rappeport and others” was building a drive-in in Mahoning Valley. The first time it was mentioned in The Morning Call of Allentown was April 18, 1949 when it wrote that “the theatre has been completed” and that it “will bring to this section one of the nation’s finest theatres.” And there was a later interview with a guy “who witnessed the theater’s opening in 1949”.

The Morning Call wrote on May 23, 1952 that Mitchell Rapaport, president of the Mahoning Corporation, had sued the drive-in and A. M. Ellis Theatres Co. Separately, the drive-in had sued Ellis Theatres for interfering with operations. It was a complicated, long story of loans, intertwined businesses, and hiring Max M. Korr Enterprises two weeks earlier to buy and book films.

An auction notice for the drive-in (725 car capacity), its lease, equipment, and name was in the Oct. 4 Philadelphia Inquirer. Five days later, The Morning Call wrote it was sold at auction by the Ellis Theater Company to Dr. Joseph J. Humphries and R. C. H. Becker Sr. “Both men had been associated with the operation of the theatre,” wrote the Mauch Chunk Times-News.

Amazingly, it gets more confusing. The Nov. 15, 1952 issue of Billboard magazine said the Mahoning was sold at auction to Max Korr and associates.

Despite the sale, the Motion Picture Almanacs continued to list Ellis Theatres as the owner through the 1961 edition. At first the capacity was 500, then in 1956, the capacity dropped to 450, where it stayed. The owner for at least the 1963-66 editions was Claude Reinhard, who had founded Palmerton TV Signal Corporation, an early cable TV company.

The Morning Call wrote on Aug 23, 1992 that Amos Theaters Inc. (owned by Joseph Farruggio) had owned the Mahoning since 1981. Its manager was described as “an employee of the Palmerton Telephone Company”.

On Aug. 22, 1997 The Morning Call wrote about Farruggio preparing to show adult movies and trying not to run afoul of the Carbon County DA. “He’s shown no movies this year, but now says he’ll play the explicit films two weeks to maintain the drive-in’s 49 years of continuous operation, then close again.” Farruggio said he needed the proceeds to pay overdue taxes. (He eventually backed down and showed Mimic and Copland instead.) He had been battling “for five years” to get permits to add three screens. The drive-in is adjacent to an airport (then Carbon County, now Jake Arner Memorial) so the FAA was involved.

In 1998, the Mahoning opened for only a few weeks because health permits “require the facility to be open at least one night a year.”

I’m not sure when Mike and Deb Danchak came in, or there were other owners in between. In 2013, as the digital conversion loomed, the drive-in had a misadventure starring a guy who said he fixed up drive-ins but never told me which ones. My story and that guy’s comment can be found here.

Go-Fund-Me page for their damaged marquee. Link to their Facebook page below that.

Neon Michael has some very interesting facts and again excludes William C Shirar and Loretta K Shirar were also partners with Dr Humpries and Mr Becker. There was another business and partnership the Mahoning Valley Floral Conmpany located south of the Drive In.SAd thing everyone has passed away so the facts are messed up! Thank You and named Mahoning was a Native American word for a creek or a lick hence the name Mahoning.

Video of the unveiling of the repaired marquee last May.

Current article that says the solar company looking to buy the land has backed off.