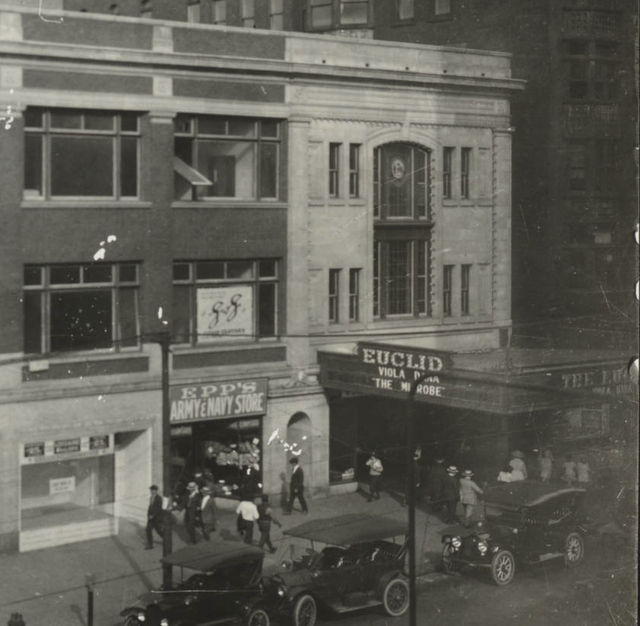 Loew’s Euclid Theatre was opened in 1914. It was renamed Euclid Theatre in 1919. Taken over by the same real estate developer, Joseph Laronge who at the same time was building the Mall Theatre. The Euclid Theatre featured movies and a full orchestra on a moving stage. Initially it did not become a first-run house since it was not owned by a national syndicate.

Thanks Mike,looking foward to seeing it.

Grand opening for the Euclid is at View link
You are right, CWalczak, It was never a Loew’s

Thanks for the ad, Mike; it answers a question that dave-bronx and I have wondered about, specifically, on which of the corners at Ninth and Euclid was this rather short-lived Euclid actually located? The ad indicates that the theater was next to the Lenox Building. The Lenox Building (spelled in some old sources as Lennox) was torn down to build the building that I remember as the Union Commerce Bank Building, now the Huntington Bank. That means that the theater was on the northeast corner or very near to it on Euclid. I would guess then that this Euclid Theater was also torn down to clear space for the bank, unless it was located where there are now some lower rise office buildings next to the Huntington Bank just east of it on Euclid.

But now a new question appears: If this Euclid Theater opened with the feature “Eyes of the Soul,” then it most likely if not definitely opened in in 1919. However, Loew’s Euclid (at 105th St. and St. Clair Ave. – later known as the Doan) is also said to have opened in 1919 – see separate entry for this theater). It’s hard to believe that there would have been two Euclid theaters operating at the same time.

Mike: Perhaps another of the movie ads that you have on your Picasa Gallery page of Cleveland theater ads could solve the problem. There is one there that Loew’s placed in the Plain Dealer essentially for the opening of the Loew’s State that has “1917” and “1921” as part of a banner across the top of the ad; the ad also includes a listing of all of the Loew’s theaters operating in Cleveland in 1921. But I cannot enlarge the image enough to read the addresses if they are included, although they appear to me that they are. If you can enlarge the ad or if you have the original, I would be curious to know what the address is for Loew’s Euclid. If would turn out that it is Ninth and Euclid, then the information for the Doan here on CT is wrong, and that this Euclid was, in fact, operated at some point by Loew’s and that the Doan was never Loew’s Euclid. This would make sense, because as I noted on the page for the Doan, calling that theater Loew’s Euclid does not make sense, given its location on St. Clair Ave.

Now that I can more clearly see a 1921 ad posted on Mike Rivest’s Picasa photo site that lists all of the Cleveland theaters operated by Loew’s in that year for this theater, it is apparent that some information posted by a number of us, including myself, is most likely inaccurate.

This grand opening adindicates that the theater probably opened in 1919 rather than 1914, as “Eyes of the Soul,” according to the IMdB, opened in April of that year. The 1921 Loew’s ad indicates that the Loew’s Euclid was at 9th and Euclid so this has to be the same theater, unless there were two theaters named Euclid at 9th and Euclid. Therefore, the theater was operated by a major chain at least for some portion of its life.

What is not clear to me is when this theater closed. If it disappears by 1930 from the city directory, as indicated by one of the previous comments, and the other Euclid Theater in East Cleveland was open by then, then the closing occured sometime in the 1920’s.

A trade journal called Buildings and Building Management published an article about the Union Trust Building in its issue of August 21, 1922. Here is the section that mentions the Euclid Theatre:

“Money and Commerce reports that ground has already been broken for the new twenty-story bank and office building of the Union Trust Company, Cleveland. This building is to be erected at the northeast corner of Euclid avenue and East Ninth street.

“The old Lennox building, which now stands at the northeast corner, the Euclid Theatre building on the corner of Ninth and Chester, a frame house, a power house and large packing ground now occupying the Chester avenue frontage are being removed to make way for the new banking structure.”I notice that the grand opening ad in Mike Rivest’s album gives the theater’s location as “East 9th Street at Euclid Avenue (Next to Lennox Building)” so the entrance must have been on 9th Street, despite the theater’s name.

So it did have a short life: it opens in 1919, and is gone by mid-1922 at the latest – and this in an era when theaters were not just made of cement block and sheetrock.

I did find a picture of the the Lennox Building, but it doesn’t show what is left or right of the building.

It occurs to me that this theater might well have opened in 1914, but under a different name. Perhaps the grand opening ad from 1919 was just a re-opening under the new name Euclid Theatre. If so, there might be listings for this theater with a 9th Street address and a different name in city directories from 1915 to 1918.

Cleveland also had a house called the Euclid Theatre earlier than 1914. The August 8, 1908, issue of The Billboard mentions a Mr. J.H. Eschman, then operating an amusement park in Minneapolis, saying that “…he started in with the old Euclid Theatre of Cleveland, Ohio….”

This house re-opened as Loew’s Euclid in 1919. It had already been in operation as the Euclid Theatre for several years. Here is an item from a late 1913 issue of Variety:

“CLEVELAND’S NEXT BIG ONE.

“The next big theatre to open here will be the Euclid. It will seat over 2,000 people. The date for English Grand Opera to start the house off is set for March 1.

“Max Faetkenhauer will manage the Euclid, built by Jas. Holcomb who has of late purchased considerable of the property on Euclid avenue near where the new theatre is located.

“Nothing is known of the future policy of the Euclid beyond that it will open with opera.”It looks like the opening year of 1914 we originally gave was correct.

Grand opening ad from April 20th, 1919 is now in the photo section.